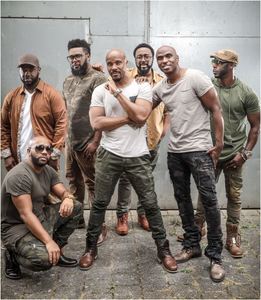 In a music world rife with technological tricks of the trade, one vital commodity is getting lost in the shuffle: the beauty of the human voice. Enter Naturally 7. This seven-man crew is more than just your average singing group. Its members have perfected an intriguing a cappella style they've branded as "Vocal Play" -- singing as instruments. Summoning up soul, rap, rock and folk in one harmonious balance, in its quest to celebrate the voice, Naturally 7 not only sings but also creates every backing instrument heard on its songs. We're talking drums, bass, guitars, horns, flutes ... even down to turntables.

After appearing on CBS’ “World’s Best” this season, they return to The Ridgefield Playhouse on Sunday, September 15 at 7:30pm, with their 20th-anniversary tour, part of Pepsi Rock Series powered by Xfinity. Opening for Naturally 7 will be the The Rolling Tones, an a cappella group from John Jay High School in Cross River, NY.  Visit 850 Degrees Wood Fired Restaurant (424 R. Main Street, Ridgefield) for dinner before the show and enjoy a complimentary draft beer with purchase of an entree when you show your ticket! Media partner for this event is 94.3 WYBC, The Rhythm of The City.

Naturally 7 are more than just an a cappella group. They are a band without a band. Having met in school and gospel choir, they quickly discovered that they were doing more than just singing songs, they all discovered perfect hypervocal capabilities. That’s why Naturally 7 call their music “vocal play.”  They have famous fans such as Michael Bublé (whom they joined on three world tours), Coldplay (“Fix You” is one of the finest adaptations of music you can imagine), Quincy Jones (who called them “best a cappella band worldwide”), Herbie Hancock (listen to their H. Hancock medley) and many others.

Their repertoire is a mix of their own compositions and cover versions. Stepping beyond R&B and pop, Naturally 7 taps into various genres from traditional gospel and rock to 17th century baroque that, on the surface, don't seem to mesh. But, in the hands of musical director/first baritone/rapper front man Roger Thomas and his six enterprising cohorts -- brother Warren Thomas (drums, third tenor), Rod Eldridge (first tenor, turntables, trumpet), Napoleon "Polo" Cummings (fourth tenor, guitar), Dwight Stewart (second baritone, trombone), Garfield Buckley (second tenor, harmonica) and Armand "Hops" Hutton (bass) -- the impossible becomes possible. The group gives a nod to its spiritual influences by sampling Mahalia Jackson's gospel classic "Trouble of the World" on the beautiful and raw "Mahalia." Scoring a musical coup, Naturally 7 samples Queen's "Bohemian Rhapsody" on "Galileo." Notes Thomas, "We're the first in the world licensed to sample the rock band, and we're honored to be able to do that."

Naturally 7's aural magic really glistens on what Thomas calls "hybrids": taking the essence of a well-known song and putting their own melodies and lyrics on top. Wham's infectious "Everything She Wants'' provides the impetus for "Life Goes On" while Art of Noise's "Moments In Love" finds the group imitating all of the song's instruments and singing its own song to the mix on "Moments (I've Been Loved)." Among the set's eight original tunes are "Keep the Customer Satisfied" and "Rhapsody of the Queen."

Naturally 7 rose to prominence in 2007. Jumpstarting their exposure was a video of the group on a Paris subway train singing Phil Collins' "In the Air Tonight" that went viral and exploded on YouTube. After Bublé tapped the group as his worldwide touring partner, Naturally 7 has since headlined the Playboy Jazz Festival, played London's Royal Albert Hall, performed at the BET Honors for Herbie Hancock and sang at Quincy Jones' 75th birthday party in Montreux, Switzerland.

"Most a cappella groups just focus on the a cappella part," says Thomas. "And that's fine. But we also try to make sure it's about good songs. Those never die."

For tickets ($45) call or visit the box office, 203-438-5795 or go online at ridgefieldplayhouse.org.  The Ridgefield Playhouse is a non-profit performing arts center located at 80 East Ridge, parallel to Main Street, Ridgefield, CT.