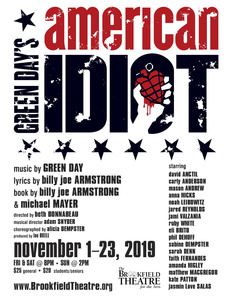 In Green Day’s combustible rock opera "American Idiot" sex, drugs and rock &  roll are the mantra of three young friends: Johnny, Tunny and Will until unexpected challenges confront them and they’re forced to face the hard realities of life. Bursting onto the Broadway scene, this rocket-fueled musical features music by Green Day with lyrics by Billie Joe Armstrong and book by Billie Joe Armstrong & Michael Mayer. It won two Tony Awards adding to the Grammy they had garnered for their multi-platinum album.

Performances are on Friday and Saturday evenings at 8 pm and Sundays at 2pm from November 1 to November 23. There will be a free preview performance for senior citizens on Thursday, October 31 at 8 pm.

Because of mature content, “American Idiot” is not intended for young audiences. It should also be noted that flashing lights and smoke effects will be used during the production.

Tickets are $25 general admission, $20 for students and seniors and are available at the box office or online at BrookfieldTheatre.org. Reservations may be made by calling 203-775-0023.