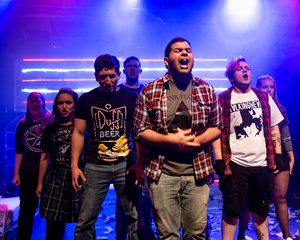 Every generation, teenagers and young adults set out to change the world and some of them, inevitably, will feel oppressed and defeated by the world they live in. And since mainstream theatre is hugely influenced by the current climate, every fifteen to twenty years a musical hits Broadway which reflects the pain and rage that these young people are experiencing. In 2010, that musical was Green Day’s American Idiot, which is currently enjoying a run at The Brookfield Theatre of the Arts.

American Idiot uses the music of Green Day to tell the story of three friends – Johnny, Will, and Tunny. Just as the three young guys are about to set off on their own, Will learns that his girlfriend, Heather, is pregnant. He stays behind, falling into a drug and alcohol stupor. Shortly after setting out, Tunny joins the military and Johnny discovers drugs and Whatshername – a gorgeous girl he meets after he sees her in the window of her apartment.

TBTA’s production features an ensemble cast of seventeen performers. The ensemble, made up of ten extremely strong performers, moves as a character of it’s own and in many ways is the backbone of the story. Ensemble performers include Jarrod Reynolds (Who doubles as Favorite Son), Eli Brito, Phil DeHuff, Sabine Dempster, Sarah Denn, Faith Fernades, Amanda Higley, Matthew MacGregor, Kate Patton, and Jasmin Love Salas. David Actil portrays Johnny with sort of a rough tenderness that is hard to accomplish in a musical, let alone one that feeds on anger. Mason Sacco as Tunny and Noah Leibowitz both give strong performances as Tunny and Will, respectively. Anna Hicks as Whathername easily glides from shallow to hurt to strong. Ruby White shines as the fierce tiger mama Heather. Props to both Jami Valzania and Carly Phypers, who as St. Jimmy and Extraordinary Girl shine as two powerful performers who leave the audience begging for more every time they are on stage.

Special recognition must also be paid to the band, led by musical director Adam Snyder. Rock musicals require a delicate balance between letting loose and staying cohesive; this was done with evident skill and obvious passion behind the music.

But the true star of this performance is Stephen Cihanek’s lighting design. With his use of on stage televisions, lit backdrops, and brilliant and skilled use of lights, he creates a world on stage that is reminiscent of a Broadway production. Even if you are not a fan of angry rock music, the production is worth a visit for anyone theatre savvy just to awe at what has been created on stage with the lighting design.

American Idiot is not meant for anyone faint of heart or young children; the production includes heavy drug abuse, sexual situations, and much adult language. But if you are up for a night of some fantastic music sung by extremely talented singers, American Idiot at TBTA should be on your list of weekend outings.

Performances are on Friday and Saturday evenings at 8 pm and Sundays at 2pm through November 23. Because of mature content, “American Idiot” is not intended for young audiences. It should also be noted that flashing lights and smoke effects will be used during the production.

Tickets are $25 general admission, $20 for students and seniors and are available at the box office or online at www.BrookfieldTheatre.org. Reservations may be made by calling 203-775-0023.