The Ridgefield Playhouse brings new livestreams to watch from the comfort of your own home!

Details
Published on Friday, 12 March 2021 13:07
Written by The Ridgefield Playhouse 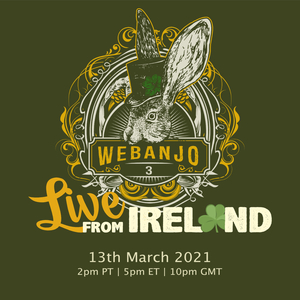 “Spring forward” with new livestream performances from The Ridgefield Playhouse that the entire family can enjoy from the comfort of your own home!  Whether it’s live music, art documentaries or Broadway theater - The Playhouse has something for everyone! This weekend - kick off St. Patrick’s Day early with We Banjo 3 on Saturday, March 13 at 5pm! An Irish, bluegrass crossover group, We Banjo 3 has earned widespread praise for their incredible live shows. If you don’t know them, know that their music stirs something special within listeners’ hearts. What they do best, they do better than anyone else. This special concert includes all four WB3 band members together and performing live on stage for the first time since the pandemic shut down concerts one year ago. The show will stream live, in real time, from the stunning Pearse Lyons Distillery in Dublin, Ireland. Grab a pint and watch along with us!

Art and film lovers have raved about our Great Art on Film Series on the big screen at The Playhouse. Now fans of this series have an opportunity to see select films again from the comfort of their own home. We begin with one of the most popular titles: Frida - Viva La Vida with livestream screenings on March 17 - 23 at 1pm, 4pm, 7pm and 10pm. This cinematic documentary film celebrates the revolutionary pioneering artist of contemporary feminism.  Featuring interviews with Hilda Trujillo Soto, the director of the Frida Kahlo Museum in Mexico City and Cristina Kahlo, Frida Kahlo’s grandniece, historical documents, photographs, clothes, and other personal items belonging to Frida, kept in the archives of the Frida Kahlo Museum and normally not accessible to the public, captivating reconstructions, and Kahlo’s own paintings, on display in some of the most amazing museums in Mexico. The film is narrated by Asia Argento.

Mark your calendars for more Great Art on Film with Hermitage available May 26 - June 1 at 1pm, 4pm, 7pm, 10pm. This spectacular documentary tours through  St. Petersburg’s State Hermitage Museum, a wonderful complex of buildings with the largest collection of paintings in the world, to retrace two and a half centuries. Audiences pass through the magnificent interiors that provided a meeting point for foreign artists, architects and intellectuals creating connections through art and culture.

The Ridgefield Playhouse also has a special encore presentations for theater fans! Now seen by more than 8 million people around the world, War Horse is a powerfully moving and imaginative stage drama, a show of phenomenal inventiveness, filled with stirring music and songs. At its heart are astonishing life-size puppets by South Africa’s Handspring Puppet Company, who bring breathing, galloping, charging horses thrillingly to life on stage.  Based on the beloved novel by Michael Morpurgo, adapted for the stage by Nick Stafford. See the show that Time Out called “A remarkable achievement… an astonishing piece of theatre.” Captured live from London’s West End, War Horse will be available to livestream March 31 - April 6 at 1pm, 4pm, 7pm and 10pm.

Captured live from the London stage, the ‘freshest, most fabulous, feel-good musical of the decade’ (The Hollywood News) KINKY BOOTS dazzles! Fans can see the award-winning musical April 14 - 20 at 1pm, 4pm, 7pm and 10pm. With songs by Grammy® and Tony® winning pop icon Cyndi Lauper, direction and choreography by Jerry Mitchell (Legally Blonde, Hairspray), and book by Broadway legend and Ridgefield’s own Harvey Fierstein (La Cage Aux Folles), this ‘dazzling, fabulously sassy and uplifting’ (Time Out) award-winning musical celebrates a joyous story of Brit grit to high-heeled hit as it takes you from the factory floor of Northampton to the glamorous catwalks of Milan!

Tickets for all of these livestreams are available by visiting The Ridgefield Playhouse website at www.ridgefieldplayhouse.org