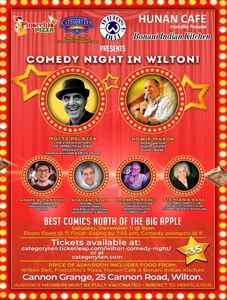 Brookfield comedian Andrew Manning will perform at Comedy Night in Wilton on December 11.

Manning has performed at Stand Up New York and Sirius XM.  The event is produced by CategoryTen LLC of Wilton, which has been assisting Helping Hands of Bridgeport, which distributes food and clothing to the homeless and food insecure in the Bridgeport area for some time. The distribution has typically been to the homeless who congregate on Sundays under Bridgeport’s John Street Bridge as well as throughout the PT Barnum housing complex with the primary work done by The Unitarian Church in Westport. CategoryTen’s assistance has been made possible by its game sales and its live comedy events.

CategoryTen’s founder Shahan Islam states that the event will feature “much needed belly laughs provided by major comics who have appeared in New York at Caroline’s, Stand Up New York and in Connecticut at Foxwoods, Mohegan Sun and the Ridgefield Playhouse.”    This will be the second Comedy Night in Wilton event and will be held at the beautiful 19th Century Cannon Grange on Saturday, December 11th at 7:00 PM!!  (Doors open and food served at 7; comedy starts promptly at 8 PM.)

Tickets are available here and are only $35 – which includes food and drink from Wilton area businesses including Wilton Deli, Pinocchio’s Pizza, Hunan Café and Bonani Indian Restaurant.