Details
Published on Thursday, 27 January 2022 09:48
Written by The Ridgefield Playhouse 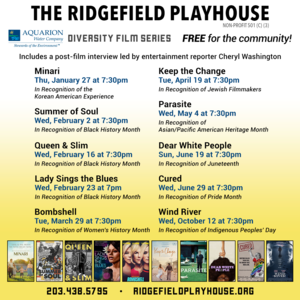 All films in the Aquarion Water Company Diversity Film Series are presented as free events for the community. Following each film, a pre-recorded interview led by reporter Cheryl Washington will also be screened. These enlightening interviews can be viewed later on The Ridgefield Playhouse YouTube Channel.

On February 2nd, Summer Of Soul presents a powerful and transporting document of an epic event in the summer of 1969: the Harlem Cultural Festival featuring performances by Stevie Wonder, Nina Simone, Sly & The Family Stone, Gladys Knight & The Pips, Mahalia Jackson, BB King and more. In his debut as a filmmaker, Ahmir “Questlove” Thompson reintroduces these lost performances as part of a documentary that combines music, history and story-telling to celebrate Black history, culture and fashion.

Then on February 16th, Queen & Slim offers a thrilling modern drama about love, justice and righteous anger, focused on a young couple on the run from the law after a first date gone wrong. Starring Daniel Kaluuya and Jodie Turner Smith, directed by Melina Matsoukas and written by Lena Waithe and James Frey.

For more information or to reserve your free tickets, go online at ridgefieldplayhouse.org or visit or call the box office (203) 438-5795. The Ridgefield Playhouse is a non-profit performing arts center located at 80 East Ridge, parallel to Main Street, Ridgefield, CT and is committed to keeping the arts alive and available to all.