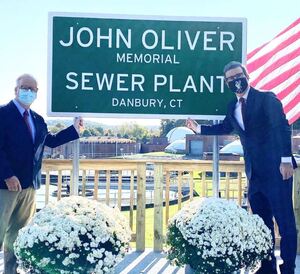 Clad in a white hazmat suit, Oliver said last night on his HBO show Last Week Tonight with John Oliver,  “I took all necessary precautions, not only because of the pandemic, but because I was in Danbury, Connecticut.”

The photo you see here (sans hazmat suit) is courtesy of Mayor Mark Boughton (Oliver was clearly HOT in that suit).

The journey was documented and aired last night. Since the writing of this post, the actual footage from the show has been made unavailable. But, you can watch this video courtesy FOX 61.  Oliver's trip to Danbury is the grand finale of last night’s show. And it is grand indeed.

Oliver says, “My heart pounded as I prepared to meet my destiny and, to a lesser extent, Mayor Mark Boughton.”

The event is a culmination of months of banter between Danburians and the comedian who said he would agree to name the sewer plant the John Oliver Memorial Sewer Plant if (and only if) Oliver was physically present for the Ribbon Cutting. To this end, Oliver promised to donate $55,000 to three local charities:  Connecticut Food Bank, DonorsChoose Danbury Teachers, and the ALS Association Connecticut Chapter.

In the clip, Oliver shamelessly admits that he found himself tuning into the City Council meetings via Zoom and watching with bated breath to see if Danburians like the idea of Oliver’s sewer plant which he deems, “the single greatest sewer plant in the Continental United States".

[BTW: Oliver actually showed a clip of last week’s City Council meeting]. “The meeting culminated with a nailbiting roll call in which the votes came in,” says Oliver.

As the ribbon is cut, the ecstatic Oliver jumps up and down, shouting “We did it, We did it”.

He finishes his show with a bit of sarcasm and nostalgia.

This sewer plant represents all the things we need right now. Think about it, this place takes the worst that humanity can produce and transforms it into something we can live with and now more than ever, there’s something inspirational in that Because at the end of this awful, awful year, what could be more important than evidence that if we want to, we can come together overcome our difference and sort our sh_t out.

I couldn’t be prouder than to have my name on your sh_t sorter.

Thank you Danbury, you didn’t Danbury this up!