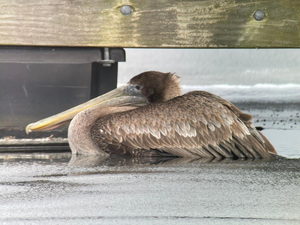 Quick action by Connecticut Audubon’s staff led to the rescue of an injured Brown Pelican huddled in distress on a cove in Essex today.

EcoTravel Director Andy Griswold had gotten word that there was a pelican in the area and headed out this morning to search for it. Brown Pelicans are southern coastal birds that rarely travel further north than Virginia Beach, Va.

Andy found the bird sheltering against a floating dock in a marina. A normal, healthy pelican would be feeding energetically, but this bird wasn’t.

“That was my thought — it’s not active when it should be,” Andy said.

The Brown Pelican, awaiting rescue near a dock in Essex.

The rescuers gently corralled the bird under the dock.

“They grabbed it by the beak — that’s the technique,” Andy said. “They immediately put it in a big plastic bin. It was not resisting, not trying to get out. The bird didn’t put up any struggle.”

Once safely in the bin, the DEEP staff drove it to A Place Called Hope. As of mid-afternoon, the bird was being hydrated and medicated, and treated for bruised wings.

Andy Griswold took the video, which was edited by EcoTravel’s Matt Bell. They and Alisha Milardo of our Roger Tory Peterson Estuary Center in Old Lyme were on the scene in Essex today.