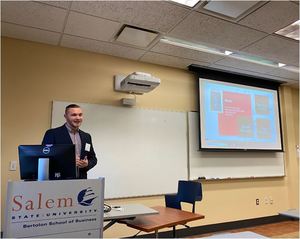 Among the student presenters is Kyle McCarthy '20 of Brookfield, who majors in Elementary Education and History and Social Science. Their project was titled "Dolley Madison: The Queen of Hearts."

Eastern's History Department offers "HIS 311: U.S. Presidents and First Ladies," Which focuses on the origins and developments of the American presidency and the position of First Lady from the 18th century to present day. Each student presenter based their projects on the panel of "First Ladies of the United States," and focused on historical figures such as 19th-century First Ladies Dolley Madison and Sarah Polk.

Advised by Assistant Professor Thomas Balcerski, the students worked all semester gathering information for their topics in preparation for their oral presentations. "They represented Eastern with professionalism and intelligence," said Balcerski, when asked about his honor students. The students' projects were "Dolley Madison: The Queen of Hearts," "Sarah Polk: Membress of Congress," "The Other Eleanor: Rosalynn Carter, An Overlooked First Lady" and "Barbara Bush: Matriarch & Grandma."

Phi Alpha Theta is the national honor society for undergraduate and graduate students and professors of history. The society has more than 350,000 members with approximately 9,500 new members joining each year. The qualifications include an overall GPA of 3.5 or higher, at least 12 History credits completed at Eastern and junior or senior status.