Provocative puppetry on stage in Hand to God at WCSU 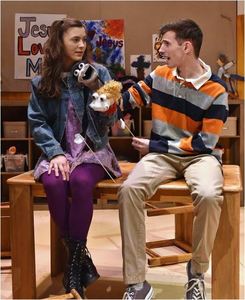 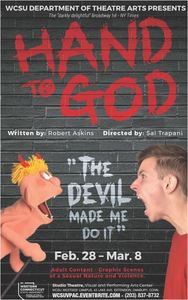 According to WCSU Professor of Theatre Arts Sal Trapani, the show’s director, ‘“Hand to God’ is a terrifyingly funny and provocative play that is not for the faint of heart. This dark comedy forces us to confront our religious and spiritual beliefs in a uniquely hilarious way. It was a big hit on Broadway and I know audiences will enjoy the creative genius on display by our wonderful company of actors, designers and technicians.”

The WCSU cast includes Zach Brown, of Griswold, as Timmy; Jordan Cowan, of Sherman, and Jamie Leo, of Southbury, as Jessica; Tyler Gallaher, of Wappingers Falls, New York, as Pastor Greg; Kelsey Lepesko, of Stratford, and Chelsea Weaver, of Tolland, as Margery; and Will Stewich, of Shrewsbury, Massachusetts, as Jason.

The production contains profanity, with language and themes suitable for mature teens or older. Seating is limited and the best way to guarantee a seat is to purchase tickets in advance. For tickets, visit www.eventbrite.com/e/hand-to-god-tickets-70833453767. Tickets, if any remain at the door, can be purchased by cash or check only.