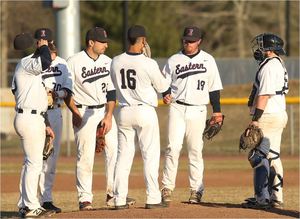 The Eastern Connecticut State University Warriors baseball team was off to a 4-1 start in its 2020 season of play before the NCAA canceled all college sports through the end of the school year due to concerns over the coronavirus pandemic. Nonetheless, 39 student-athletes made the team, which was vying for another competitive season in the Little East Conference (LEC).

Among the scholar-athletes is freshmen William Oldham of Brookfield, number 21, who plays Pitcher and majors in Business Administration.

The Warriors compete in the LEC, which was established in 1986 as a single-sport league by six public institutions throughout New England. The LEC has since become a multi-sport league with eight primary members, six affiliate members and 19 championships.

Eastern offers a broad-based, Division III athletic program aimed at safeguarding the amateur aspects of the various sports and maintaining the proper perspective of athletics within Eastern's academic mission. By placing emphasis on the values of equity, diversity, sportsmanship, health and wellbeing, Eastern's athletic program encourages students to contribute more effectively to our society and live richer, fuller lives.