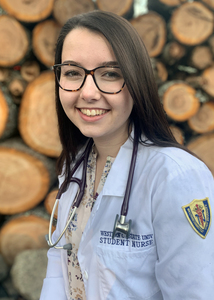 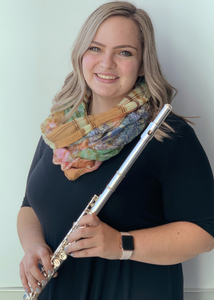 Lynch and Wahlers are both participants in the WCSU Kathwari Honors Program. Lynch is a Connecticut resident and Wahlers is from New York. While Lynch has pursued studies in the sciences, Wahlers has engaged in the arts. Both are being recognized for their academic pursuits and community involvement endeavors.

Lynch is a resident of Sandy Hook who will receive a Bachelor of Science in Nursing during a virtual commencement this weekend. In addition to her status as a Kathwari Honors student, she is a member of the Sigma Theta Tau International Nursing Honors Society; Chi Alpha Sigma, the National College Athlete Honors Society; and was a member of the National Field Hockey Coaches All-Academic Team in 2016-18. Lynch also was a member of the Little East Conference All-Academic Team in 2017-19. While at WCSU, she was an Academic Resource Mentor in Newbury and Fairfield residence halls. She also served as a Peer Tutor for fellow Nursing students, and held a job at the university’s Career Success Center.

As part of her Nursing education, Lynch participated in clinical rotations at Danbury Hospital, Waterbury Hospital and Yale-New Haven Hospital. She has incorporated Psychology courses into her studies that she plans to utilize in her nursing practice, and believes in quality control and assurance in health care. Lynch’s next step is to attend graduate school to become a Family Nurse Practitioner or Neonatal Nurse Practitioner. She recently accepted a full-time RN position in a NNICU in the area.

Lynch said, “My time at WCSU taught me more than I ever could have imagined. My professors challenged me and encouraged me to be my best — for my patients, my colleagues and my community. My coaches motivated me to persevere and rise against all odds. My classmates taught me how to have fun and keep an open mind. There are hundreds of lessons I learned in four years, and for that I am forever grateful.”

Lynch continued, “I’d love to thank my field hockey coach Dani McDonnell, my nursing professors and my parents — I couldn't have done it without them!”

Wahlers is a Music Education major from Holmes, New York, who also is a Kathwari Honors student, and will receive her Bachelor of Science in Music Education on Sunday. Among her many accomplishments as a student, Wahlers was a James Furman Honors Competition Finalist in 2017, and the recipient of multiple scholarships.

Wahlers was a member of the Ives Concert Flutists, ultimately holding the offices of vice president and president. She also was a member of the WCSU Brass Club and the university chapter of the National Association for Music Educators. As a future educator, Wahlers has engaged in classroom observation and student teaching in preparation for her future career.

“From a young age, I have always wanted to be a teacher,” Wahlers said. “As I grew up, I realized that I wanted to be a teacher because of the impact that my teachers had on my life. I will never forget my experience in the Carmel Central School District and the teachers I had there. Not only did those teachers help me become a lifelong learner, but also a good citizen.

“At WCSU, the inspiration continued as I had teachers that pushed me to be the best I could be. The Department of Music became my second home during the past four years. I constantly found inspiration from my professors and peers. It was the perfect combination of the WCSU Department of Music and Kathwari Honors Program that helped refine my current philosophy of music education. During my first three years at WCSU, I was working multiple jobs while being a student, but I always felt like I was involved because of the community that WCSU has built.

Wahlers expressed her appreciation to her family and friends for supporting her in everything she has done. “I could not have done this without them.”

For more information, send an email to This email address is being protected from spambots. You need JavaScript enabled to view it. .