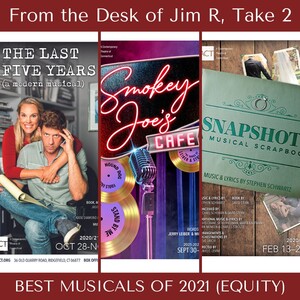 Despite the COVID-19 pandemic and the unpredictability of the Omicron Variant, 2021 was still a surprisingly great year for Equity-based musical theatre - LIVE or streamed - with specially selected productions of every size, shape and color coming at you day by day, week by week, month by month with very few postponements or COVID-related outbreaks disrupting ongoing performances or opening nights.

After about a couple of hours of quiet deliberation and scanning through an endless variety of content, from reviews and playbills to columns and specially marked reminder notes, things fell neatly into place, one by one, line by line.

Read the article in its entirety HERE.