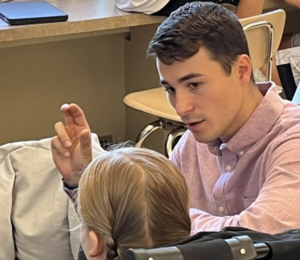 New Teacher Feature: "RPS Sees the Teacher I Will Become"

The school year is off to an auspicious start for new RPS teacher Brendan Leslie. “I’m having so much fun,” he says from his cheerful, orderly sixth-grade classroom, festooned with writing tips, literary terms, and an Aaron Judge home run count. “Scotts Ridge has a great environment. Tim [Principal Tim Salem], Lisa [Assistant Lisa Frese], and Jen [English Chair Jen Bray] have laid such a sound foundation that I can slide in. I’m not on my own.”

Leslie displays an infectious enthusiasm for the teaching profession. “I was impacted by two great teachers,” the Brookfield resident says about pursuing a career in education. “I love English.” After college, he did a one-year ARC certification program and was a long-term substitute in his hometown last year. “It was a fantastic year,” he says. “I had so much fun and I learned that I’m good at connecting with the kids. I know what to say and how to make an impact.”

His ability with students is clear as he meets with groups of students making character maps about the story, “Tuesday of the Other June”. The students are respectful and show a calm focus that belies the fact that this is their first year in middle school. Efthimia Kutrubis is the SRMS special education teacher supporting students with IEPs in Mr. Leslie’s classes. “You can’t hide how much fun he is having,” Kutrubis says. “The energy and connection just show.”

At 22 years old, Leslie was aware when he was interviewed at RPS that he might not have the experience for such a desirable district. “Excellence is the standard here,” Leslie says. “The small details make it great. I felt it in the first interview. Since I was hired, I have been so impressed. If the district can pull off that Convocation, they can do anything.”

Principal Salem delights in recounting how auspicious hiring Leslie was for RPS: “Isn’t he great?” Salem exclaims. “Did he tell you that he hit a hole-in-one the day he interviewed? It was a good sign!”

An avid golfer, an amateur chess player, a Yankees fan, Leslie says that starting the district was like hitting a hole-in-one. “I know I’m in the right profession and the right place. They hired me for the teacher that I would become.”