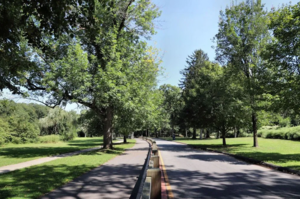 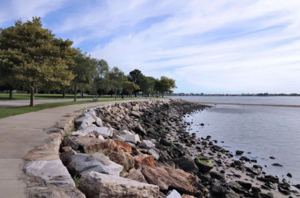 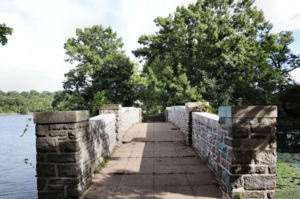 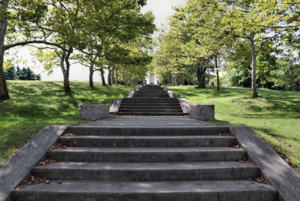 Sometimes you read a book about a place thousands of miles away, and it ends up leading you to a place close to home. For me, this time, that book was Spying on the South by Tony Horwitz. As a fan of many of Horwitz’s earlier travel narratives, I wanted to read his last one, published shortly before his untimely death, even before I knew exactly what it was about. As it turned out, the book combines three of my favorite subjects: history, travels through overlooked swaths of America, and unexpected connections to Connecticut.

In Spying on the South, Horwitz follows the trail of Connecticut native Frederick Law Olmsted, who, before rising to fame as the designer of many of the nation’s most celebrated outdoor spaces (New York’s Central Park being the best known example), made a living as a roaming correspondent for the New-York Daily Times. Traveling through the South on the eve of the Civil War, Olmsted, a staunch abolitionist, observed the deepening fissures in the country. (His writing on the South was compiled into a book titled The Cotton Kingdom.) Horwitz did his reporting in 2015 and 2016, and the parallels are depressingly familiar to anyone who has spent time traveling around the country recently.

Spying on the South is crammed with surprising historical tidbits (to give just one example: only eleven of the defenders of the Alamo were Texas born, and nine of those were of Mexican or Spanish descent; over twenty came from abroad; and a few may have been Jews.) But the fact that sent me down an internet research spiral is one I’d known, but forgotten: Olmsted was born and raised in Hartford. This led me to discover the Olmsted Legacy Trail, created by the Connecticut Chapter of the American Society of Landscape Architects, and to learn that Olmsted also left his mark on the landscape of two of the state’s cities. I decided to revisit the parks he designed here, two in Bridgeport and one in New Britain, and found them to be more impressive than I’d remembered. Each is different, but all three are vast and lovely, with sweeping green lawns, sheltering stands of trees, and gently curving paths. They are grand, almost formal spaces, yet they feel welcoming to everyone, just as Olmsted intended.

Designed around a 2.5-mile beach stretching along the shore in Bridgeport’s South End, Seaside Park seems to go on forever. You can walk or drive from one end, where a jetty extends towards Fayerweather Island and its lighthouse, to the other, where an elaborate Civil War memorial towers above a grassy circle. Along the way you pass statues and monuments, playgrounds and picnic tables, shade trees and glimpses of rocky seawall. From its inviting crescent of sand to its dramatic entryway, spanned by a granite arch, Seaside is one of Fairfield County’s most impressive beaches.

The grounds surrounding Bridgeport’s Beardsley Zoo make up a park that’s an attraction in its own right. A road for cars runs parallel to paths for walkers and cyclists, stretching beside a glassy pond and looping around ball fields and picnic areas. Rolling hills and tree-dotted fields hide two historic stone bridges, one leading to a small island and the other to a long-abandoned road, now covered with grass. Through the years, Beardsley Park has retained much of its original pastoral beauty. It’s an underrated spot for, as Olmsted put it, “seeking a few hours complete relief from scenes associated with the wear and tear of ordinary town life.”

One of five parks in Connecticut listed on the National Register of Historic Places, Walnut Hill also makes up one-third of the New Britain Historic Walking Trail. As its name suggests, the park soars above the city. A curved staircase climbs from the street to a rose garden, where a striking 90-foot column commemorates local residents killed in World War I. There are tennis courts, baseball and softball diamonds, a concert shell, and a one-mile paved loop that’s a favorite of local walkers and runners. Throughout the park, trees, open spaces and the naturally sloping topography combine to create a peaceful oasis in the center of the city.

Also included on the Olmsted Legacy Trail are two Hartford sites: the grounds of the Institute of Living, which Olmsted designed and which boasts a collection of notable trees (taking photos is not allowed); and Old North Cemetery, location of the Olmsted family plot. I haven’t been to the Institute of Living, but when researching this post I did stop by Old North (which I previously recommended in my Hartford favorites post last month) to search for the grave. The no-frills headstone does not stand out in this site known for historic funerary art, but Olmsted might appreciate the design of the cemetery itself, with its connecting paths and numerous trees. Fittingly, it is not just a final resting place for the dead but a place of quiet contemplation for the living.

Visit The Size of Connecticut for more off-the-beaten-path travels in Connecticut and beyond.