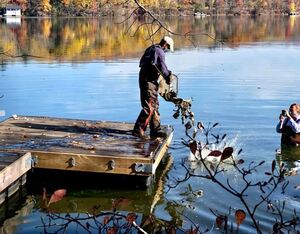 It was every angler’s dream come true. On an unseasonably warm Saturday in November, a truck carrying a full tank of fish pulled up to the water’s edge and released nearly 1,500 foot-long brown trout into Lake Waramaug.

While an enticing prospect for anyone who fishes, the trout are part of the Lake Waramaug Task Force’s annual event to keep zooplankton plentiful and cyanobacteria at bay. The program, in effect for the past 25 years, has been working, according to executive director Sean Hayden.

Several Task Force members gathered at the group’s dock at the tip of Arrow Point in Warren on Nov. 7 to help transfer the young trout from their tanks by nets into the lake. More than $10,000 worth of trout were brought in by Sandy Hook hatchery Rowledge Pond Aquaculture.

“Those fish are worth about $7 a piece,” Hayden said with a chuckle.

Legend has it that the Native Americans dubbed the lake Waramaug meaning “good fishing place.” By the 1970s, Waramaug lived up to its legend as it became known to anglers in the region as a trophy bass lake and, to encourage sport fishing the state introduced alewives, bait fish that thrive on zooplankton, to the lake. As the alewives eventually reduced the zooplankton population to zero, there was an overgrowth of cyanobacteria that threatened the quality of the lake. Since the mid-1990s, the Task Force has been stocking the lake with trout to eat the alewife.

“For years, there was absolutely no zooplankton in the lake,” said Hayden, adding that evidence of the program’s success has been determined by tests indicating less cyanobacteria. “We’re trying to use natural processes. This is another way to make sure the zooplankton population stays as high as it can.”

As for a reduction in the number of alewives, there is only anecdotal evidence, Hayden said, in that people who fish the lake have reported not seeing them frequently and not finding them in gutted trout. The overall health of the lake has been steadily improving.

The vital, ongoing operations of the Lake Waramaug Task Force are funded exclusively through generous, annual donations from concerned residents around the lake, within its watershed area and throughout the region.