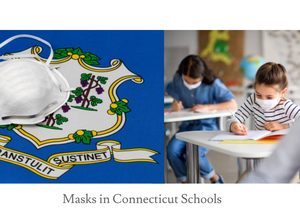 It’s that time of year again: Connecticut schools are back in session! Most public school systems including Ridgefield, Danbury, Newtown and Brookfield returned to in-person learning the week of August 30th. While any other year of returning to school in Connecticut would be swift and rules would be met with little resistance, that is not the case during a pandemic that has polarized students, school faculty, and parents on an unprecedented scale. The most divisive topic that has dominated discussions about school has been the regulation surrounding masks.

On August 5th, Connecticut Governor Ned Lamont announced an executive order requiring the wearing of masks regardless of vaccination status in certain indoor public places, including in public and private schools. While students are required to wear masks inside, educators have the option to remove them. According to this order, masks are not required outdoors on school grounds, like during outdoor sports practices and games. However, local jurisdictions have the right to escalate masking regulation as they see fit. This order is in effect until at least September 30th. Governor Lamont has said that he will release new guidance “very soon.”

This ruling is being put into effect at a time when four out of eight Connecticut counties are classified as being high in COVID-19 transmission, according to the latest data released by the CDC. This is being caused by both the accelerating spread of the Delta variant and the fact that around 36% of Connecticut residents are still unvaccinated. It turns out that the vaccination rate of eligible people under 18 is lowest among all age groups. The school mask rules in Connecticut are fluid and very likely to change if the COVID-19 status in the state changes for the better, which of course depends on necessary precautions, including vaccination and mask wearing, being taken by the majority of citizens.

While Governor Ned Lamont and most school systems in Connecticut state that vaccines and mask mandates in certain spaces are the best precautions that people have to mitigate the risk of contracting, spreading, and being severely affected by the Coronavirus, many people and groups in Connecticut like Unmask Our Kids and Parent’s Choice strongly oppose this philosophy.

On August 25th in Cheshire, Connecticut, a group of parents shouted at Governor Lamont and other legislators to “unmask [their] kids” at a school district roundtable discussion. After many minutes of continuous harassment, the meeting was forced to end. According to numerous reports including this one by FOX61, the parents who were mainly unmasked and with their children shouted obscenities and harassed Governor Lamont and other lawmakers on their way out. Contrary to popular belief in the Northeast, people like these protesters believe that simple medical decisions like masks for students should be made by their parents even if these decisions are in the interest of public safety.

The mask debate in schools will likely continue until the end of the COVID-19 pandemic. While we can’t control the prevalence of this tension-filled dispute, we can end the widespreadness of this virus. The CDC and other medical bodies recommend that if you're unvaccinated, get vaccinated; if you haven't been wearing a mask where you are supposed to, start doing so; and if you feel sick, please stay home. We can all individually do our part to contribute to this effort.