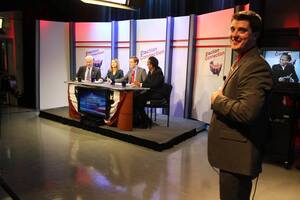 Since its debut in November 2011, “Election Connection” has provided election night coverage of news and race results featuring an anchor team of students and faculty, supported by student reporters covering key races and voter concerns. This year’s show airs on election evening, Tuesday, Nov. 8, from 8 p.m. to midnight.

Executive producer Dr. JC Barone, WCSU professor of Communication and Media Arts, observed that students participating in the interdisciplinary course that produces “Election Connection” stay late after class and work weekends because they are driven by a commitment to the program.

Barone has drawn from his extensive professional experience to design the course as a vehicle to train students in media and news production for the demands of today’s job market. “This year’s election is important with many state races to report on,” he said. “Word has spread that this is an educational experience that will help students in their careers regardless of what their discipline is.”

WCSU’s “Election Connection” productions have earned recognitions from professional organizations in the communications field, including honors in the category of Studio Multi-Camera Production at the national Broadcast Education Association’s Festival of Media Arts as well as Student Production Awards from the National Academy of Television Arts and Sciences Boston/New England. Additional recognitions Telly Awards for Live Coverage and a Communicator Award of Distinction from the International Academy of the Visual Arts. “Our goal is consistently to deliver quality programming to the community and Connecticut,” Barone said.