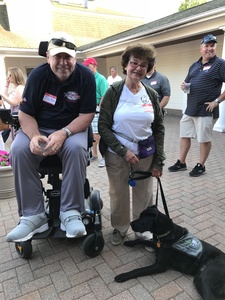 Putnam Service Dogs is a 501(c)3 nonprofit NY corporation that provides free service dogs to people with physical disabilities other than blindness.

Jake Jacobson is proof that physical disabilities can afflict anyone. A passionate, accomplished golfer since he was 12, he first noticed his drive distances were becoming oddly shorter and shorter in 2008. He was officially diagnosed with Primary Progressive MS in 2011, at age 48. Jake’s deep knowledge of the game, and his passion for golf are obvious when he talks about it. His MS has progressed so rapidly that he now uses a wheelchair, can only play golf with the aid of a Paramobile to support him to stand, and only his right arm can still swing a club. Jake describes his fast progressing MS as an opportunity to relearn the game of golf each year to adjust to his current physical abilities.

This will be the 3rd year Jake has been the featured golfer at Putnam Service Dogs’ golf tournament. He golfs with the assistance of a Paramobile, and will be featured at the hole nearest Centennial’s clubhouse. He’ll give golfing tips to each player as their foursome passes through his featured hole, and hits a shot they can play if they choose, rather than the ball they drove. Jake says the most frequent tip he gives the golfers is club selection.

Before his MS, Jake had been an active player, earning a spot as a professional tour player on the Space Coast Mini-Tour, and was a fixture for more than 20 years at the Ridgefield Golf Club. Now he is a golf teacher, and a fundraiser. He has raised over $110K for the National MS Foundation, and after joining the Stand Up and Play Foundation in 2015, has helped place 6 paramobiles in NE golf courses. A paramobile costs $35,000. The Stand Up and Play Foundation grants $10,000 towards the purchase of a paramobile, and Jake has helped the interested golf course fundraise the remaining $25,000. He teaches golfers with disabilities how to use the paramobile. Additionally, with his work with the Star Foundation in Norwalk, Ct., he teaches golfers with intellectual disabilities how to golf. He also raises money for the Star Foundation.

The golf bug bit Jake at age 12, when he was a caddy at Wellesley Country Club outside of Boston. His younger brother began caddying there the next year, and the 2 brothers shared their love, and learning of golf. By the time Jake reached high school he was Caddy Master, overseeing about 50 caddies. He had full access to the golf course and practice area. He won some golf tournaments as a Massachusetts Junior Golfer. Williams College, the #1 Liberal Arts ranked college in the US, recruited Jake for both their golf and hockey teams. Golfweek ranks Ephs’ Taconic Golf Club (William’s course) as the #2 college course in the US. Jake spent his college summers on the Williams’ campus, working on his game, and playing major amateur golf tournaments around the eastern US. He finished 2nd to Brad Faxon in the New England Amateur. He made the NCAA Dlll All-American Team when he was a Junior. After graduation he turned pro and earned a spot on the Space Coast Mini Tour. He was a PGA member and taught at Belmont Country Club in the summer and Indian Creek Country Club in the winter. At Indian Creek he worked on his game with Masters Champion, Ray Floyd, who was a member there. Jake has shot 4 hole-in-ones.

Putnam Service Dogs is honored to have Jake Jacobson as their featured golfer at their 3rd Annual Golf Tournament, Friday, June 7, 2019 at Centennial Golf Club, Carmel, NY. Check in of golfers is 11am - 12pm. For non-golfers who wish to attend the event, Jake will be at the dinner. Single golfers are welcome - you’ll be matched for a foursome.

Mission Statement of Putnam Service Dogs: Our service dogs change the lives of our recipients and their families, adding love, joy, independence, and ease. We honor and promote the nurturing bond between humans and dog