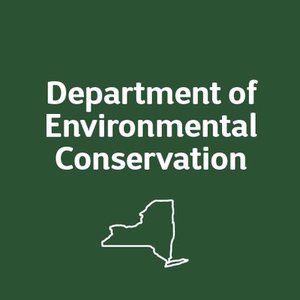 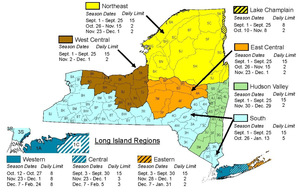 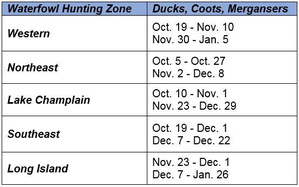 Canada goose hunting regulations can often be confusing because of the number of zones, varied bag limits and season lengths. Although some of the boundaries and bag limit differences appear to be random, they were designed using scientific data to maximize opportunity for resident Canada geese, but also to protect migratory populations that are much more sensitive to hunter harvest. Season lengths and bag limits are, again, developed in collaboration between the USFWS and the Atlantic Flyway Council. After the season frameworks are established (e.g., season length, bag limits, outside allowable dates), DEC gathers input from waterfowl hunters and the waterfowl hunter task forces to select dates that maximize opportunity for hunters in each zone.

Each year, DEC works with the United States Fish and Wildlife Service (USFWS) and the Atlantic Flyway Council to develop waterfowl hunting regulations and season dates. This year, DEC, with the assistance of Cornell University and the waterfowl hunter task forces, implemented a new process for selecting the 60-day duck season dates within the dates allowed by the USFWS. New York duck seasons offer opportunity to hunt from the first week of October through the last Sunday in January, depending on the waterfowl hunting zone. By having five waterfowl zones, it allows DEC to select dates that maximize duck abundance in each zone which varies based on habitat and latitude.

Bag Limits for all Other Species

There are no changes to season dates or bag limits for any of the other webless migratory game birds (rails, gallinules, snipe, and American woodcock). For more information and season dates for these species, please visit DEC's website.

For Dates of both Duck and Canada Goose seasons in NY, click on the accompanying NYS DEC picture above and scroll through the attached photos.