Exhibit of Paintings by Robert Barthelmes at Mahopac Library 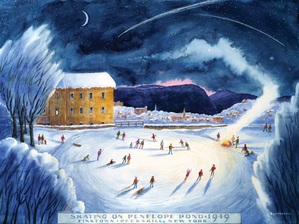 Robert Barthelmes' Finktown series depicts growing up in an American blue-collar neighborhood in the middle of the 20th Century. The collection of images was published as a book in 2018.

Finktown received its quirky name in the eighteen sixties when John Fink, an enterprising young man, arranged with landowners in the undeveloped eastern part of Peekskill to sell lots to build homes for the growing village.  The venture was a success, and soon a small community grew in the area.  The people called the new neighborhood "Fink's Town" which evolved into Finktown.

Barthelmes began the series of paintings from his childhood memories of Finktown in 1998 with a scene entitled "Skating on Penelope Pond".  Many people found the painting charming so the theme developed into a series which will be displayed at Mahopac Library during the month of December.