Meet The Players of Carmel High School's "A CHRISTMAS CAROL" 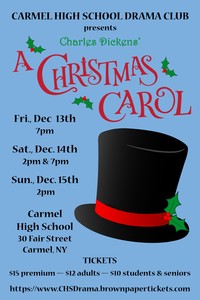 This year, the Carmel Drama Club is debuting its first winter show with A Christmas Carol by Charles Dickens. A Christmas Carol follows the classic story of the cold-hearted, Christmas-hating Ebenezer Scrooge and his journey in becoming a more kind-hearted man.

“Chess, Beck and I have not only been devoting hundreds of hours to this year’s show, but the three of us also had to seek out an adviser during the summer.” says stage director, James Purr, “We are all beyond thankful for Mrs. Micale's presence this year as our adviser. She was willing to devote all of her time to not only put on a fantastic show, but to make our Drama Club family thrive.”

Drama club does not favor cast nor crew, as we recognize that we are all the moving parts of a show and neither should hold superiority over another. Both halves of production have worked tirelessly to offer the best experience they can for their 2019 show. “I enjoy the adrenaline rushes you get on nights of shows, along with the entertainment aspects of watching from the sidelines,” says stage manager, Megan Young, who this will be her 9th show as a member of stage crew, “You are constantly rewarded with a sense of happiness and satisfaction when a set piece is finished, or you get to see a complete set for the first time. When the last show rolls around, there is nothing more rewarding, yet saddening, then seeing the sets you put so much time into building get broken down for next year’s production.” Student director, Rebecca Spears, also seeks that same level of gratification in both set design and character design. “I love Drama Club because it is an opportunity to make long lasting friendships and also gain important acting skills. I have learned that not everyone will try to build up the people around them but working together and finding good role models is an important part of growing up. I have worked extensively with the actors in order to put on a fantastic show, as well as to form a good bond between the cast and crew.”

Throughout the long hours of consistent rehearsals, every participant of this show has grown in more ways than one would normally account for. “I’ve learned to trust in others and the process. So much of being an actor relies on trusting fellow actors and crew to do what’s needed when it’s needed and if that trust isn’t there, then the foundation isn’t so great to begin with.” proclaims lead, Madeline Olsen, who began her life in theater when she was only 9 years old and has been a part of the Carmel drama department since the 6th grade, Luckily I’ve been blessed with a fantastic crew who are all like family to me and wonderful cast mates that keep the play lively and interesting who are all basically family to me as well.” Franchesca Cabrera, who’s thespian experience did not begin until she was in 5th grade but has held the roles of producing as a student since her sophomore year, feels the same way. “I never would’ve realized how much we all could grow, as both actors and as people if it hadn’t been for this show. Being a part of a live show is incredibly stressful, for anybody from the adviser to the student directors to the ensemble; but there is a secret contract of trust between the club members and the audience: the promise to not miss your cue, to not forget your lines, or to ruin the drama experience onstage with personal drama backstage.”

“Drama Club has been my home for many years,” says Jimmy Purr, “I’ve met many, many amazingly talented and wonderful people through Carmel’s programs, and I care about everyone dearly. We’re a team. A family. We’re inseparable.” From our drama club family to yours, we wish you a happy holiday season and hope to see you - final performances are December 14 at 7pm and December 15 at 2pm at Carmel High School!