Britain's PM moved out of ICU 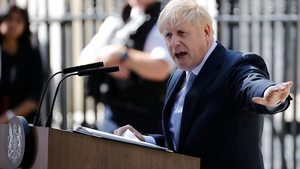 British Prime Minister Boris Johnson on Thursday was moved from intensive care to a ward in the same hospital.

The Prime Minister's Office said Johnson would be closely monitored during the early phase of his recovery at St. Thomas' Hospital in London.

The BBC reported that Foreign Secretary Dominic Raab would continue to deputize for the prime minister for the next few days.

Johnson tested positive for the COVID-19 coronavirus on March 27 and was in self-isolation in Downing Street for over a week. He was taken to a hospital on Sunday after his condition deteriorated. He was shifted to intensive care a day later.