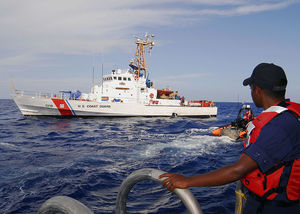 The US Coast Guard celebrates its 230th birthday today. Created by the U.S. Congress on 4 August 1790 at the request of Alexander Hamilton as the Revenue-Marine, it is the oldest continuous seagoing service of the United States. As Secretary of the Treasury, Hamilton headed the Revenue-Marine, whose original purpose was collecting customs duties at U.S. seaports. By the 1860s, the service was known as the U.S. Revenue Cutter Service and the term Revenue-Marine gradually fell into disuse.

The modern Coast Guard was formed by a merger of the U.S. Revenue Cutter Service and the U.S. Life-Saving Service on 28 January 1915, under the U.S. Department of the Treasury. In 1939, the U.S. Lighthouse Service was also merged into the Coast Guard. As one of the country's six armed services, the Coast Guard has been involved in every major U.S. war since 1790, from the Quasi-War with France to the Global War on Terrorism.

Thank you all who serve our country in this vital organization. Happy Birthday and Semper Paratus