Astronauts Conduct the First ﻿Spacewalks of the Year 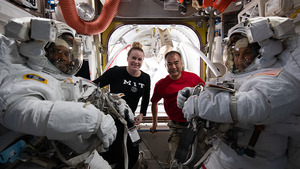 NASA astronauts Victor Glover and Mike Hopkins ventured outside the International Space Station on Wednesday, Jan. 27, for the first spacewalk of the year! What did they do out in the vastness of space? They finish installing a European science platform and complete long-term battery upgrade work. It was the first spacewalk for Glover and the third for Hopkins.

In the second spacewalk of the year conducted on Feb. 1, Glover and Hopkins completed work to replace batteries that provide power for the station’s solar arrays and upgrade several of the station’s external cameras! The spacewalk concluded after a little more than 5 hours.

Two additional spacewalks are planned for the near future. During the next spacewalk, Glover and NASA astronaut Kate Rubins will work outside the station to prepare its power system for the installation of new solar arrays to increase the station’s existing power supply. Stay tuned!

Learn About the Spacewalks