The Northern Westchester / Putnam St. Patricks Day Parade is on! 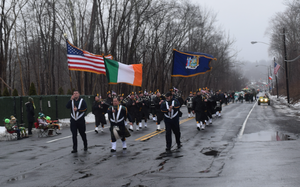 After year off due to the Covid-19 pandemic the organizers of the Northern Westchester / Putnam St. Patricks Day Parade, the Third largest parade in New York State, have announced that the parade is returning better then ever in 2022.

"We are back and are excited to get back to work. We are happy to announce that we are moving forward with holding our annual St. Patrick’s Day Parade. SAVE THE DATE - NYS third largest parade will be taking place on Sunday, March 13th, 2022."

The parade steps off by the Mahopac Fire Department HQ on Route 6 and proceeds north on Route 6 to the Shop Rite Shopping Center located at 1001 Route 6 in Mahopac.

The organizing Committee met on October 13th to start the process of organizing the parade and fundraising for the parade. Local Civic Groups that have representatives on the Committee and sponsors of the parade include:

The Emerald Society of Putnam County

The Friendly Sons of St. Patrick of Putnam County