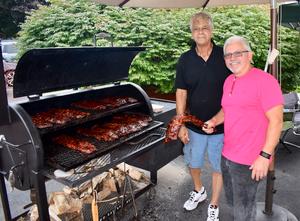 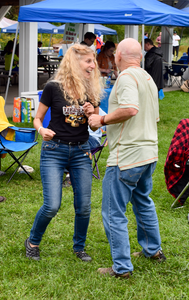 Today is the second and last day of the festival and yet despite yesterday's overcast weather and a bit of rain early in the day, hundreds came out to hear great music and enjoy an excellent BBQ all prepared and cooked by Rotary Club members.

Great music, BBQ, kids activities and raising funds for local non-profit organizations. Join us for the last day of fun! Bands will perform from noon until 6 pm.

Playing an up tempo, boogie and blues repertoire that's heavy on slide guitar, electric and acoustic. With both original tunes and classic covers, they have aired on DJ Wendee's blues show, and later on dj Christine Vitale's show, both on Fairleigh Dickinson's WFDU 89.1 fm radio station out of Jersey city. Heavily influenced by Johnnie Winter and other great blues men of the past, be prepared for a rocking good time.

Southern born, Northern raised , Dylan Doyle has been steeped in everything from Bob Dylan, Wes Montgomery, and Bill Withers to John Prine, Jimi Hendrix, and The Band. From this comes a unique musical interpretation that lies somewhere within the delta of Roots, Rock, and Jazz, giving him a style that defies classification.

Touring nationally since age 15, Dylan became a seasoned professional at a very young age. He has played with such notable musicians Rob Stoner (Bob Dylan, Don Mclean), John Platania (Van Morrison, Natalie Merchant), Ben Cauley (Otis Redding) and Bill Payne (Little Feat). Stoner called Dylan one of the most prodigious players he has known with abundant natural talent. John Platania has referred to Dylan as “The Future.” Ben Cauley, after playing with Dylan in Memphis said, “Dylan Doyle sounds like a young Jimi Hendrix.” In the words of Bill Payne upon sharing the stage, “Music is a conversation. Dylan spoke beautifully and was listening to the musicians around him. His play was imaginative and original.”

Chris O'Leary Band
Chris’s musical background includes duties as lead singer and front man for rock and roll hall of famer and Grammy award winner Levon Helm’s band, The Barnburners. During the 6 years that Chris and Levon played together they toured across the US and Canada lighting up stages everywhere they went. Chris has appeared on stage with: Legendary Rolling Stones sideman Bobby Keys, The Fabulous Thunderbirds, Jimmy Vivino, Jeff Healy, Dan Akroyd, Albert Lee, Dave Edmunds, Dave Maxwell and the great James Cotton to name just a few. Chris has also recorded with Bill Perry and Hubert Sumlin, among others.

Take Broadway uptown, and than, a little bit further upstate where nestled in between the hills and the Hudson resides songwriter Anthony Gach. While studying composition and trumpet pedagogy at The Conservatory of Music at SUNY Purchase, Gach fronted his first all original band in which he sang, and doubled on guitar and trumpet. The next few years were spent in and out of various local and regional bands where he was fortunate to perform with or in support of a number of acclaimed artists including Smokey Robinson, George Clinton and P-Funk, Jewel and Bobby Sanabria. These days you can find him performing extensively in the greater NY area as either a solo artist or with his nine piece blues infused funk rock project HARMONIC AGGRESSION.

Away from the stage Anthony is the head brass instructor at Putnam County Music Center where he also teaches songwriting and guitar. He currently serves as the Composer in Residence at Woodside Productions.

No stranger to great blues and keeping the crowd moving. Chris Raabe is going to be filling in the gaps between bands with some sets that will keep the magic and great vibe going!