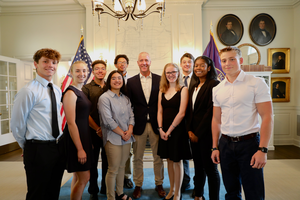 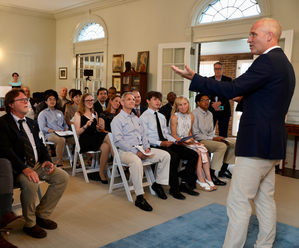 Rep. Sean Patrick Maloney (NY-18) hosted a send off reception to honor local students appointed to service academies this year. At the reception, Rep. Maloney presented certificates to appointees and celebrated their achievements and dedication to service with the students, their families, and members of the Service Academy Selection Board.

“Today, we celebrated the incredible students from across the Hudson Valley who were appointed to U.S. Service Academies,” said Rep. Maloney. “Acceptance to the Service Academies is incredibly selective, so these students truly represent the best and brightest and we are so privileged they have chosen to continue their education in service to our nation. Congratulations to the appointees and their families!”

“Each of these extremely talented young Americans have been accepted into a Service Academy based on their individual merit. All of their previous focus, hard work and support from family has paid off as recipients of such a great honor,” said Major Beau Pendergraft, USMA Professor and Service Academy Selection Board Member. “That said, from this point forward, each of them must foster a mindset shift to being granted the privilege to lead America’s sons and daughters through whatever may come in the future in order to enable the continuance of FREEDOM within our Great Nation.”

“It has been an honor and privilege to be associated with the Service Academy Selection Board,” said Jay Jaffee, Officer at the West Point Mint and Service Academy Selection Board Member. “It is uplifting to meet and interview motivated young people who desire to attend these institutions where they will be developed into their generation’s leadership and custodians in the defense of this great Republic.”

The reception was held Thursday, June 2, in Newburgh. In addition to student appointees and their families, Rep. Maloney was joined by Service Academy Selection Board members, including:

Footage from the event, including remarks from Rep. Maloney, is available here.