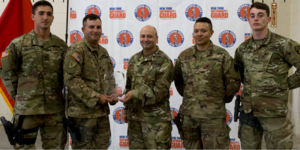 Held May 30 to June 2, the annual Adjutant General's Marksmanship Competition encourages shooting excellence among New York Guardsmen on rifle and pistol skills and winners move on to national-level marksmanship competitions.

Fay and three other members of his pistol team will now compete against teams from across New England and New Jersey at Camp Ethan Allen Vermont, June 21-23.

The New York National Guard competition is held at the Camp Smith Training Site near Peekskill.

Participants in the Lt. Col. William Donovan Combat Team Pistol Match use the military's NATO-standard nine millimeter M-9 pistol which is issued to all Soldiers authorized to carry the weapon.

The competition is named after Lt. Col. William "Wild Bill" Donovan, a commander of one of the 69th Infantry Regiment's battalions during World War I who earned the Medal of Honor for heroism and went on to found the Office of Strategic Services, the predecessor of the CIA, during World War II.

The 107th Military Police Company is headquartered in Brooklyn.

Other members of the team are: PFC Michael Abrahamsen from Bohemia; Sgt. Robert Marino from Franklin Square; and Corporal Alberto Suarez from Briarwood.