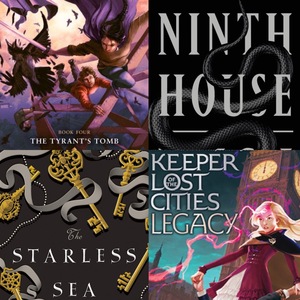 Frankly, one of the last things I should be doing in my reading life is looking for new releases to pre-purchase consider purchasing. My book buying has gotten out of hand over the last few months. Conveniently around the same time as I stopped meticulously tracking new book purchases. But I redid my home office recently, and the subsequent organizational efforts revealed that I have 52 books—otherwise known as half a year’s worth of reads—on my to-be-read shelf...and that’s just my physical to-be-read shelf.

With that required disclaimer out of the way, allow me to share with you four new releases I’ll probably end up pre-ordering because I’m completely unreasonable when it comes to books:

Rick Riordan writing about Graeco-Roman gods and myths is an auto-buy for me, usually before or on the release date. I proceed to consume said books in 36-48 hours then stew in my frustration for the ensuing year or two that it takes Riordan to write another book.

What I appreciate and enjoy about his books are the way he foregrounds both the absurdity of the myths while also recognizing how valuable they can be to think with.

Trials of Apollo is his third series set in the Percy Jackson world, in which Graeco-Roman gods, and their demi-god children, exist. It follows the god Apollo—who Zeus has sent back to earth as a mortal teenager for reasons—as he undertakes a quest to recover his immortality. Riordan raised the stakes considerably in the third book, and I am intrigued and a little frightened to see where he will take this story next.

I’m not sure if I’m actually excited about this book or have fallen under the hype-machine’s spell. The book’s elevator pitch is “The mesmerizing adult debut from Leigh Bardugo, a tale of power, privilege, dark magic, and murder set among the Ivy League elite.”

I do love books set in universities (e.g. Donna Tartt’s The Secret History and M. L. Rio’s If We Were Villains), and I’ve been all about fantasy this year. I’m looking forward to the release but will probably test run the first page before committing.

Legacy (Keeper of the Lost Cities #8) by Shannon Messenger (Nov. 5)

Books, Ink contributing editor Jessica Collins got me into this series, which I’ve been reading since it was four books old. Meaning I have been with this series for quite a few years and feel invested in the story's outcome. Truthfully, I was a bit let down by the second half of the seventh book but not enough to compromise my affection for the characters and their world. Also, I want my answers!

I read Morgenstern’s previous novel, The Night Circus, at the perfect time: during Superstorm Sandy, when I had nowhere to go and nothing to do but get lost in a magical world. Seven years later, I still remember the transporting experience of reading that book and am excited to see what Morgenstern does with her next one.

It features several tropes I love: a graduate student (Zachary Ezra Rawlins), a mysterious book (that Zachary finds) with magical effects, and an ancient library (that contains hidden worlds).

What new releases are you most anticipating this autumn?