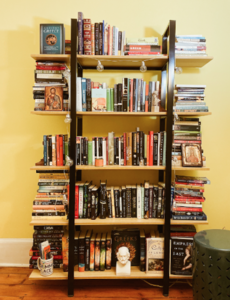 In November, I discovered a new favorite scholarly work and began two other books that I already can say I love, even though I have not yet finished them (Patrick Rothfuss’ The Name of the Wind and a new-to-me transition of The Iliad).

As for the rest of the books I completed, they are quite a mixed bag. I’m not sure whether to credit this to 1) the impending end of the year freaking me out and making me hypercritical, 2) the unexpected week-long trip I took to Istanbul mid-month distracting me, or 3) the books that I read themselves being unremarkable. I suspect it’s a combination of all three, to varying intensities.

1) With each year that passes, time overall seems to pass more quickly. Has anyone else noticed this? Perhaps eventually, if I make it to 80 or 90 years, this increasing sense of speed may become less startling? Maybe I'll be able to relax and not feel that time is slipping away before I've had time to read all the books that I want to read?

2) I realized this year that I find it difficult to concentrate on reading when I’m traveling. My mind becomes absorbed in experiencing places and people, and I don’t want to take myself out of that by plunging into a book world. I can do a bit of light reading, say on my Nook, right before bed, in the dark, to empty my mind so that I can sleep. But I don’t seem to want to expend concentration and focus on complicated books.

Regarding Penelope: From Character to Poetics by Nancy Felson

Penelope is one of my favorite Homeric characters. She may also be one of the most often underestimated and misunderstood, either dismissed or elevated as the “faithful wife,” where “faithful wife” means sexual fidelity and subordination. Her portrayal in Homer is a bit more ambiguous, on both counts. Her sexual fidelity is never explicitly stated, though her fidelity to Odysseus as her husband—her preference for him and desire for his return—is. As for subordination, I’ve always found it fascinating that the only character in the entire poem who upsets Odysseus’ famous self-control is Penelope, in book 23. Throughout the poem, she demonstrates her cunning and trickery, qualities that Odysseus shares. Also, they both cry a lot.

One of the reasons modern readers struggle to value Penelope is, I believe, because of our rejection of the notion that separate can be equal (in the case of archaic Hellas, separate male and female realms) and because we believe in the existence and sanctity of individuals, which don’t figure in the ancient world.

Felson’s study illuminates Penelope’s significance in the poem and its world. Felson draws on psychoanalytic theory, dialogism, and narratology to craft her argument. She explores the various roles Penelope plays in the poem—weaver, wife, mother, heroine, siren—and how her decisions open and close narrative avenues. This book assumes familiarity with theoretical frameworks, but I like to think that even if you don’t have a theory background, the book can be eye-opening. Felson shows how epic in archaic Hellas can be understood as an act of courtship between the performing poet and the live audience, and that performance aspect mirrors the second-phase courtship between Odysseus and Penelope in The Odyssey.

In the process of illuminating how epic functioned in archaic Hellas, Felson shows us Penelope’s agency and power, a refreshing vision to counteract the common generalizations about female characters in Greek mythology (as I’ve suggested, a confusing term).

To Kill a Kingdom by Alexandra Christo

This YA fantasy features mermaids, sirens, and humans combatively coexisting. Lira is a siren destined to inherit her mother’s undersea queendom. Elian is a prince destined to inherit his father’s kingdom. Both experience conflicting feelings about their inheritances. Both have been raised to despise the other species and actively seek to destroy it. Can you guess what happens when they meet? My favorite thing about this book: The sirens’ undersea language is transliterated Greek. I had been ignoring it until I realized that it was making sense.

Legacy (Keeper of the Lost Cities #8) by Shannon Messenger

Messenger’s series was initially planned to unfold over seven books, but its popularity led to the addition of two books. To be frank, this showed in the seventh book, which took an unexpected turn that felt unrelated to the narrative that had been developing. Book eight managed to fold that plot development into the larger arc in a way that made more narrative sense. There was a lot for me to love in this book, first and foremost much more time with my favorite character (Keefe, if you happen to have read any of the books).

Still, Legacy feels rushed, a hazard of forcing output in order to meet a fan base’s desire for immediate gratification. It felt like I was reading the first draft in which Messenger had arrived at an understanding of where the characters needed to go next but before she had time to tease out this understanding. I can’t help but wonder how this book would have turned out had the author had more time to consider pacing, balance between interior reflection and external action, and thinking through the actions characters take. Eight books into this series, I’m invested in the characters, and Messenger is a talented prose stylist and storyteller. I look forward to the ninth book and hope that Messenger is given time to let the story develop before rushing it to the audience.

25 Days ’Til Christmas by Poppy Alexander

A British Christmas romance, 25 Days ’Til Christmas brings two grieving souls together. Widowed single-mom Kate seeks to turn her life around during the holiday season. Meantime, Daniel is facing his first Christmas without his sister and struggling to find joy and purpose. Events conspire to bring them together, and, well, you know what happens.

The novel kept me reading and had some lovely moments. My primary issue with the narrative has to do with the balance of tones. The dramatic swing from negative to positive felt extreme and subsequently jarring. It was like a thunderstorm in Florida: catastrophicly raging one minute and completely and totally gone the next. Kate’s life was falling apart at the seams one moment, and the next, an avalanche of good fortune set everything right, in a matter of hours in some cases, quite independently of any choices Kate makes or actions she takes. I wish Kate had more agency to influence events.

Just One Damned Thing After Another (The Chronicles of St. Mary’s #1) by Jodi Taylor

Can we talk briefly about how much I love historical fantasy? There, we’ve done it. This series follows time-traveling historians as they record seminal events across time, with the strict prohibition that they not attempt to influence timelines. I read this for the Buzzword readathon, which regrettably coincided with my whirlwind trip to Islanbul. However, the novel turned out to be the perfect travel complement: fast-paced, silly fun that entertained and amused me without taxing my brain.

The second book I read for the readathon, Six Impossible Things, acquired during one of those Nook book sales I’m always banging on about, had been languishing on my virtual bookshelf for an age. The novel follows Dan’s efforts to get his (and his mother’s) life back on track. In pursuit of, he crafts the eponymous list of six things that seem unlikely to occur, one of which is kissing the girl of his dreams, Estelle. I don’t know that I’m the best source for YA contemporary recommendations, as I read them so infrequently, but I found this one quite affecting and sweet and endearing and charming. All the snuggly, cuddly modifiers.

Do You Dream of Terra-Two? by Temi Oh

My final, and admittedly favorite, readathon pick was this science fiction novel recommended by Tori Morrow, my go-to source for SFF recommendations (among others). The novel is set in a familiar world but with the twist that space and travel to it were invented much earlier than they were in our world. With anxiety about the long-term prospects of Earth's inhabitability, astronauts plan to populate an Earth-like planet, Terra-Two, in a galaxy far away. Intrepid teens are trained from the age of 13 to lead the colonization. Why are they trained from so young, you ask? Well, it takes 23 years to get to get to Terra-Two, so they need to get going asap. The larger group is eventually weaned down to six, who are selected to set off at the ages of 19.

You don’t need to know much more about the plot. Just let it unfold. It’s a thought-provoking psychological consideration of individuals willing to sacrifice everything for adventure, to leave behind everything and everyone they have known, and to invest every part of themselves in a dream. Also, there are action, adventure, and a touch of romance.

I filed this under ebook because that is the primary format in which I read the book, but I did also flip through the recently released illustrated edition and listen to a few of the chapters on audio during my literal journey (by plane, from Istanbul). This isn’t my favorite book in the series, but I do find revisiting Harry Potter soothing this time of year.

How was your month of reading in November? How’s your December going?