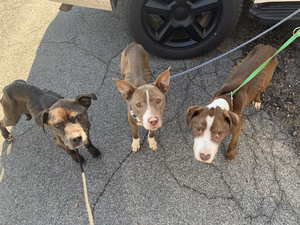 The Putnam County SPCA announces the arrest of Tammy M. Williams, of Sunset Boulevard,
Carmel, in relation to the three (3) severely emaciated Pit Bull breed dogs found abandoned on
Tinker Hill Road in Putnam Valley on March 2nd. Williams was arrested for allegedly committing three (3) counts of animal abandonment and three (3) counts of animal cruelty in relation to this case. Williams will be arraigned in Putnam Valley court on May 19th and Carmel Court on May 12th.

Over the past month, officers of the Putnam County SPCA conducted numerous interviews with associates of Williams.

The dogs, 1 brown/white male, 1 brown/ white female, and 1 brindle/dark brown female - all
approximately mid-aged to older, were brought to the Carmel Animal Hospital where they were
examined on March 2nd. All three were rated 1’s on the Body Condition Score (1 being severely
emaciated / 5 being normal / 9 being obese). After extensive veterinary care, all three dogs are
doing much better now and are in foster care.

The Putnam County SPCA would also like to thank the public for the outpouring of support,
generosity, and donations put towards the medical care of the dogs.

Putnam County SPCA Chief Ken Ross stated “The conditions the dogs were found in and the
circumstances of their abandonment required a team approach – from the PCSPCA DCO Mary
Madsen recognizing the severe condition the dogs were in, to the expertise of Carmel Animal
Hospital’s care and the assistance of the Sheriff’s Department, Carmel Police, Kent Police and
PC Probation in providing help in locating the suspect, made the arrest of the individual currently
charged in the alleged commission of the crimes possible”.

The Putnam County SPCA is a 501(c)3 not for profit corporation which receives no funding from the ASPCA, New York State, or the federal government.

Our mission is to prevent cruelty to all animals by enforcing the NYS cruelty statutes by our countywide humane law enforcement department, providing medical care and shelter to abused animals and providing Humane Education to schools and other interested groups. Given law enforcement powers by the State of New York, the Putnam County SPCA responds to calls of suspected animal cruelty throughout Putnam County.