A Decade of Water Restoration and Protection in New York State

Details
Published on Saturday, 09 May 2020 12:54
Written by NY State Dept. of Environmental Conservation 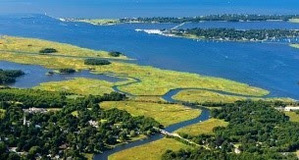 In 2011, the Water Resources Law was updated to protect New York's waters, including the Great Lakes, by requiring a DEC permit for any type of water withdrawal system having the capacity to withdraw 100,000 gallons per day (GPD) or more of surface water or groundwater. Recently DEC added downloadable annual water withdrawal reports to the DECinfo Locator, the agency's interactive data application, to provide easy access to information about public water supply systems that have the ability to withdraw 100,000 gallons or more per day.

In 2012, New York State enacted the Nutrient Runoff Law to reduce phosphorus runoff from fertilized lawns. Phosphorus is one of the leading causes of water pollution.

In 2013, the Sewage Pollution Right to Know (SPRTK) Act took effect. The SPRTK Act requires untreated and partially treated sewage discharges to be reported by publicly owned treatment works (POTWs) and publicly owned sewer systems (POSSs) within two hours of discovery to DEC and within four hours of discovery to the public and adjoining municipalities. To receive these reports electronically through NY-Alert, follow the instructions for registering on DEC’s website.

In 2015, New York appropriated $5 million to develop a Long Island Nitrogen Action Plan (LINAP). LINAP is a multiyear initiative to reduce nitrogen in Long Island's surface and ground waters. This initiative is a collaborative effort by DEC, the Long Island Regional Planning Council (LIRPC), and Suffolk and Nassau counties, with input from multiple partners and stakeholders.

In 2018, Governor Andrew M. Cuomo announced a $65 million initiative to aggressively combat harmful algal blooms (HABs) in Upstate New York. Twelve priority lakes that are vulnerable to HABs and are critical sources of drinking water and vital tourism drivers were chosen as priority waterbodies because they represent a wide range of conditions and vulnerabilities, and the lessons learned could be applied to other impacted waterbodies. The initiative included four Regional Summits of experts and local stakeholders that were held in early 2018 and the development and implementation of action plans to identify and reduce HABs causes. DEC continues to support the implementation of the HABs action plans through its grant programs.