Details
Published on Monday, 10 May 2021 08:33
Written by The Ridgefield Playhouse 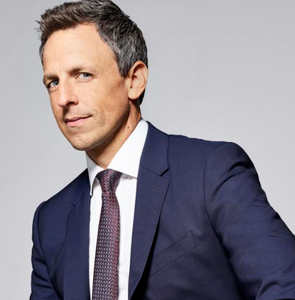 He makes America laugh and think every night – now you can get up close and personal with "Late Night with Seth Meyers" talk show host Seth Meyers himself at The Ridgefield Playhouse!

Get ready for perfectly-timed wit and off-the-cuff satire the comedian, interviewer and political commentator as he returns to Ridgefield with TWO shows on Sunday, May 16 at 4pm and 7:30pm.  This outdoor show in the tent next to The Playhouse is part of the Barts Tree Service Comedy Series.

Meyers is an Emmy Award-winning writer and one of the 2014 TIME 100, Time magazine's 100 most influential people.  Previously, Meyers served as head writer on "Saturday Night Live" and anchor on the show's wildly popular "Weekend Update."  Media partner for this event is 95.9fm The Fox.

For more information or to purchase touchless print at home ticket ($90) go online at www.ridgefieldplayhouse.org or, you can visit or call the box office (203) 438-5795.  The Playhouse is currently doing socially distanced, limited capacity seating. Concession/bar can be ordered via our mobile site so that you can pick it up on the way in, or get notified when it is ready for you to pick up once in the theater.  The Ridgefield Playhouse is a non-profit performing arts center located at 80 East Ridge, parallel to Main Street, Ridgefield, CT and is committed to keeping the arts alive and available to all.