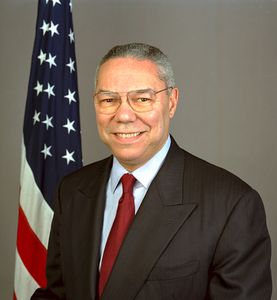 Colin Powell was a four-star general in the U.S. Army who went on to become National Security Advisor, Chairman of the Joint Chiefs of Staff, and the first Black U.S. Secretary of State. Powell passed away this morning, October 18, 2021, at the age of age due to complications from Covid-19

An ROTC graduate, Powell served in the Vietnam War. He was named President Ronald Reagan’s (1911–2004) National Security Advisor in 1987, serving until 1989. He then briefly served as Commander in Chief, Forces Command before being selected by President George H.W. Bush (1924–2018) as Chairman of the Joint Chiefs of Staff. At 52, he became the youngest JCS Chair ever appointed. Though his name came up as a possible 1992 presidential candidate, Powell declined to run, and he remained JCS Chair as President Bill Clinton’s presidency began.

In 2001, President George W. Bush nominated Powell as Secretary of State, and he was unanimously confirmed by the U.S. Senate. As Secretary of State, Powell supported the 2003 invasion of Iraq. Though Powell remained out of political life after his 2004 resignation as Secretary of State, he received three electoral college votes in the 2016 presidential election from faithless electors who had pledged to vote for Hillary Clinton. Powell’s autobiography, “My American Journey,” was a best-seller.

His military honors include a Bronze Star, Purple Heart, and Defense Distinguished Service Medal with three oak leaf clusters. He was presented with the Presidential Medal of Freedom by presidents George H.W. Bush and Clinton, the latter with distinction. He was awarded the second Ronald Reagan Freedom Award, the Woodrow Wilson Award for Public Service, and the Liberty Medal. The Boy Scouts of America honored him with their highest adult honor, the Silver Buffalo Award.