From Carmel to Clemson: Remembering “Marie” 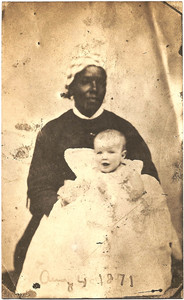 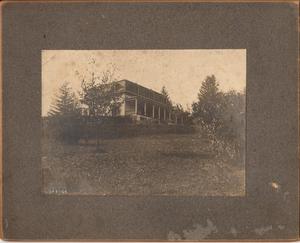 Recently, the Putnam County Historian’s Office was contacted by Mari Rosalie Noorai, Curator
of Education & Interpretation, Department of Historic Properties at Clemson University, South Carolina. She was pursuing the identity of “Marie”, an African American servant featured in a photo in Clemson’s archives. Noorai’s department researches black history and interprets stories about African Americans in the “narrative of the total life experience” as it relates to the Clemson and Calhoun families of South Carolina.

In August 1871, “Marie” took baby Isabella Floride Lee upon her knee as they sat for a photograph. Years later, this tintype would be donated
to Clemson University by Margaret Calhoun, the daughter of the baby in the picture, and great-granddaughter of Thomas Green and Anna Calhoun Clemson who bequeathed their Fort Hill plantation to South Carolina to found Clemson University. Far from that original southern
plantation, this photograph was likely taken in an unlikely town –
Carmel, New York.

Baby Isabella was the daughter of Gideon Lee, the son of another Gideon Lee who was a New York City mayor and a U.S. Representative, and Floride, daughter of Thomas and Anna Clemson. They were married in 1869 and moved to the large Hazen Hill farm in Carmel,
where they built “Leeside”, a stately, 17-room colonial mansion overlooking Lake Gleneida, surrounded by hundreds of acres of farmland, woods and orchards.

Just weeks before the photo was taken, young mother Floride died and Gideon depended on Marie as his daughter’s nurse for the next nine years. When Gideon eventually remarried, Marie returned south in 1879 to work with another family, while the Lees remained in Carmel. "Marie” was the only name on record for her in the Clemson and Calhoun families’ collection.

Gideon Lee died in 1894 and his will is on file in the probate records at Putnam County Archives. Even though many years had passed since Marie had left Putnam County, Gideon remembered her in his will, leaving an annuity to “Marie Venning, my daughter’s colored nurse.”

With the information from the Putnam County Historian’s Office, Clemson University was able to match Marie Elizabeth Venning’s name to the bequest dated 1871 in the will of Anna Clemson, who, following the death of her daughter Floride (the baby in the picture) left animpressive sum to Marie in gratitude to the woman who had cared for her only grandchild, as “a token of our appreciation of her devotion and fidelity.”

“This story is just one example of the importance of our archives and partnership with other historic institutions,” says Michael Bartolotti, Putnam County Clerk and Records Management Officer. “It’s a long way from Carmel to Clemson, but our records have now added to the
narrative of Clemson University.”

For more information on the Putnam County Historian’s Office and
Archives, visit: www.putnamcountyny.com/countyhistorian