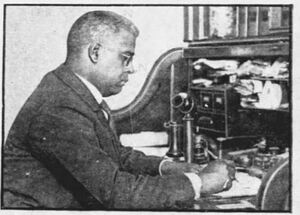 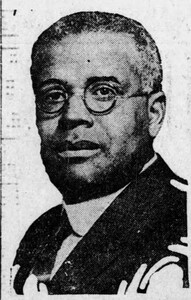 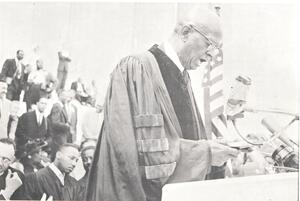 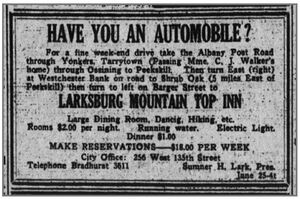 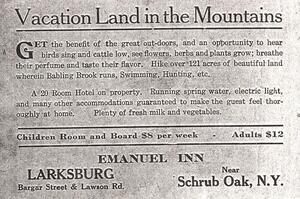 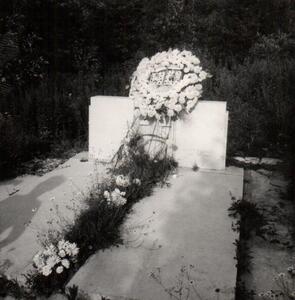 Lark was born in 1874, in Hamburg, South Carolina. He attended school at the Haines Institute in Augusta, Georgia, before attending Howard University, from which he graduated in 1897.   He taught briefly at the Haines Institute and ran a local newspaper called The South. After marrying, Lark moved to Brooklyn during the segregation era, where he opened his own print shop and eventually established a weekly newspaper, The Eye, for the Brooklyn-based African American community.

The Eye expressed Lark’s Democratic Party sympathies, breaking with many of his fellow African Americans. The Democratic Party in New York was the party of Tammany Hall, and Lark believed that the only way for Blacks to obtain their rights in the United States was to become proficient in the law. Following numerous episodes of being excluded, discriminated against, and refused in public accommodations, he became more involved in politics and an earnest advocate for civil rights.

Lark studied law and graduated from Brooklyn Law School in 1916. His involvement with Tammany Hall likely aided his appointment as an Assistant District Attorney in Brooklyn in 1923.  Lark was one of the first African Americans to hold this position; he served for two years.

In addition to his legal career, Lark made shrewd investments in New York real estate, owning residential buildings in Brooklyn. In 1922, Lark joined other large landowners in Putnam County, including fellow Tammany Hall-man and New York City Police Commissioner, Rhinelander Waldo, when he acquired a 200-acre farm in Putnam Valley, on both sides of Barger Street near the Putnam/Westchester border.  This vicinity was now accessible due to the ever-growing popularity of automobiles and the planning and construction of better roads and parkways. Lark’s desire was to create an African American community and he named his new property “Larksburg”.

Early on, Lark set aside 50 acres of land to develop a summer institute for agricultural and industrial training, like the efforts of the Tuskegee Institute, for young African Americans from Brooklyn. By 1924, both young women and men summered in Putnam Valley and were involved with running the tractor and plows, sawing trees and using a sawmill, constructing cottages, and harvesting crops of corn, potatoes, onions and beans.  Unfortunately, the school was short lived as it was met with opposition from certain leaders of the Black community who felt Lark’s efforts unnecessary and insulting as “New York State had the most liberal education system in the world.”

The “Larksburg Development Corporation” was incorporated in 1925 to serve as a construction company for Lark’s property, and the bulk of his holdings became “Larksburg Realty Corporation.”  During this time, Lark, along with a group of religious, fraternal and business associates, partnered to organize the “Larksburg Cemetery Corporation,” another division of his property to become a cemetery for Blacks.  It was named the “Emanuel Cemetery,” offering family plots of eight interments for $125. Bishop Robert C. Lawson, a prominent Pentecostal minister, was on the first board of the corporation. Around this time, Lark picked out his own preferred burial spot “at the top of the mountain”.  (By no stretch of the imagination was Larksburg or its cemetery at the top of any mountain; the “mountain” was a promotional exaggeration in Lark’s advertising.)

By the summer of 1927, Lark continued with his plan to develop a thriving community for African Americans and advertised for the “Larksburg Mountain Top Inn,” featuring rooms for rent, a large dining room, dancing, hiking and dinner for $1.00!  Large church groups would be bussed up for the weekend and driving caravans from as far away as Pennsylvania visited Larksburg for Southern barbecues and picnics.

Unfortunately, Lark would never live to see his dream of “Larksburg” fully come to fruition. In the early summer of 1931, he became ill and died on June 26th. Bishop Robert C. Lawson assisted with Lark’s funeral services and Lark was buried in his “mountain top” plot at Emanuel Cemetery.

In his will, Lark’s real estate holdings were appraised at $5,000 to be divided up amongst his seven children, along with his shares of stock in the Larksburg Development Corporation.  However, his will was not uncontested as he left his widow Virginia J. Lark only $1.00, citing “desertion” during their marriage.

Soon after his death, Larksburg was sold to Bishop Lawson who became a prominent figure in the civil rights movement (in 1957 he participated in the “First March on Washington” alongside Dr. Martin Luther King, Jr.), a worldwide minister, writer, scholar, publisher and composer. In due course, the community became known as “Lawsonville” and grew in popularity as a summer resort for African Americans, especially those who were a part of Lawson’s Harlem congregation at the Greater Refuge Temple and the farm land would be used for their Boy Scouts camp outings as well.  In this period, summer vacationing “upstate” outside New York City in places like Putnam County were popular, but few accommodations rented to Blacks. The Lawsonville summer resort contained “Emanuel Inn,” a twenty-room summer hotel, a cattle barn, grocery store, and bungalows. During Bishop Lawson’s time, it expanded with a swimming pool, garage and gas station.  At the time, advertisements for the Lawsonville summer resort offered room and board at $8 per week for children and $12 a week for adults.

Bishop Lawson died on July 2, 1961 and was buried at the Emanuel Cemetery. The cemetery once had about 300 burials but now only a few dozen unmarked burial sites remain, mostly due to disinterment and removals, and the only remaining marked graves are those of Bishop Lawson and his wife.  Today, the entrance to the cemetery is shown with concrete pillars and a bronze plaque memorializing Bishop Lawson and is owned by Greater Refuge Temple.  The only vestiges of Sumner Lark’s ambitious plans are the names of Larksburg Avenue and Summer Street (formerly Sumner Street).

The hotel, Bishop Lawson’s house, the store, and the garage were demolished more than fifty years ago, by which time the last of the Black vacationers had long since departed.  The remaining summer houses west of Barger Street in Larksburg/Lawsonville have been converted to year-round use, but none are owned by Blacks.  And on the east side of Barger Street, except for the tiny parcel containing the Lawsons’ graves, all of Lark’s property is currently owned by the Rabbinical Seminary of America.