A Delightful “Songs For A New World” at Limelight Theatre Company 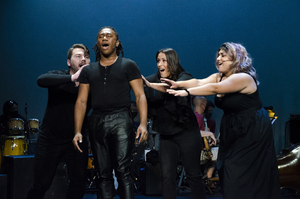 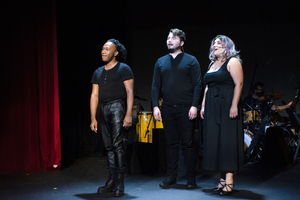 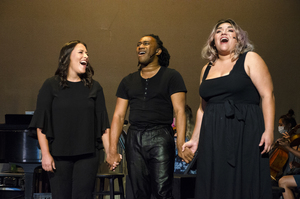 Songs for a NewWorld is the first musical from Tony Award winner, Jason Robert Brown. Written in 1995 when he was just 25, this cycle of songs is from unfinished works or are stand-alone pieces from the composer’s imagination. Brown later went on to write the musicals, Parade, The Last Five Years, and The Bridges of Madison County.

This collection of his early songs examines life, love unhappiness, ambition, and the choices that we make. They all revolve around a common theme: life-altering decisions. Each of the songs addresses one moment of decision, crisis, or change in the lives of a wide variety of characters.

It is a challenging piece to take on. Unlike a conventional musical, there is no central plot, nor consistency of characters. These “moments” include relatable shared experiences like break-ups and reunions to cataclysmal events such as the sinking of a ship full of immigrants, or the end of Christmas as we know it. The show attempts to explore a diverse cast of characters and recognize each experience’s unique challenges while highlighting the common ground that unites us as human beings.

The music is influenced by a range of musical genres, including jazz, pop and gospel. Many of the songs combine elements of these genres.

The group numbers really shine, the four performers are all terrific vocalists and the difficult harmonies are truly beautiful. Each of the cast deliver committed performances, bringing as much as they can by way of character and emotion to the songs. Some favorite moments include “Stars and the Moon,” and the comic, “Surabaya-Santa”, sung by the formidable Raquelle Viteri; James Harris gives an ironic and engaging portrait of emotional indecision in "She Cries;” Grant Evan’s soulful “King of The World” and Stephanie Scuderi’s enthralling “I’m Not Afraid of Anything” and “Christmas Lullaby.”

Stephen Ferri’s musical direction brings the score to dynamic life. He does a masterful job in both the vocal preparation, and his band leadership. His virtuoso piano performance is brilliantly supported by Gary Copozziello on Violin 1, Ally Jenkins on Violin 2, Entela Barci on Viola, Jessica Wang on Cello, Matt Sangiovanni on Guitar, Jerry Devore on Bass, Greg Germann on Drums, and Michael Blancaflor on Percussion.  Sound Designer, John Weston and his associate, John Millerd, also provide the perfect touch to the balance of the live band and voices.

This marks the inaugural production for Westchester's newest nonprofit professional theater company; Limelight Theater Company. They are planning an array of future events, including main-stage productions, staged readings, and concerts, as they raise the voices and inclusivity of all artists, cultures, and backgrounds in our performing arts community.