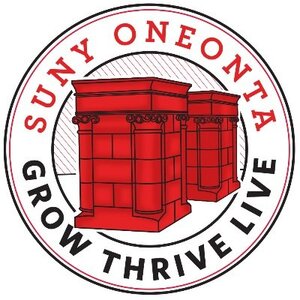 Leanne Budnick of Patterson, NY, was one of 16 students who took part in this year's GEOFYRST trip, an immersive outdoor experience for new SUNY Oneonta students.

Pitching tents, cooking and camping under the starry night sky, jumping into swimming holes, hiking, and seeing the geology of the Adirondack Region first-hand? All in a day's work during GEOFYRST (Geologic Experience Outdoors: the First-Year Regional Summer Trip), a one-credit pre-semester fall course exploring New York and the Northeast. Budnick is studying Geology at SUNY Oneonta.

On Aug. 18, students dropped off their belongings for the semester at their residence hall rooms on campus, then packed up vans with gear and hit the road, returning six days later with observations, photos, stories and new friends.

An exciting highlight of the trip included visiting Barton Garnet Mine on Gore Mountain, where the hardest, most rare garnet in the world is found. Garnet is the New York State gemstone, but most of the garnets found here are not gemstone quality, instead being used as abrasives in waterjet cutting, blast media, grinding and polishing around the world.

While on Gore Mountain, students also went on a scenic gondola "sky ride" to the summit of the mountain, which is 3,563 feet in elevation. They also visited Split Rock Falls and the Champlain Thrust Fault at Rock Point in Burlington, Vermont. On the last day of their trip, students stayed at the Thayer Farm Complex at the SUNY Oneonta Biological Field Station in Cooperstown, NY, relaxing and preparing for the start of the fall semester.

The annual trip, which began in 2007 and is open to all first-year students regardless of major, is special for a number of reasons, Hasbargen said, including the fact that "the outdoors becomes our classroom."

"It engages new students and fosters a welcoming, inclusive environment in which a cohort of students can build life-long friendships and connections," he said, "while at the same time exposing students to the outdoor environment through geology to gain an appreciation of how the Earth works. As always, I thoroughly enjoyed meeting and getting to know all of the students."

SUNY Oneonta is a public, four-year college in Central New York, enrolling about 6,000 students in a wide variety of bachelor's degree programs and several graduate certificate and degree programs. The college is known as both an exemplary residential campus that values inclusion, service and sustainability, and a nurturing community where students grow intellectually, thrive socially and live purposefully. Visit https://suny.oneonta.edu/