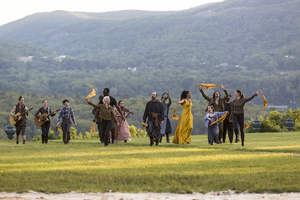 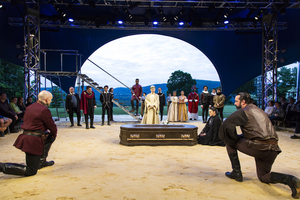 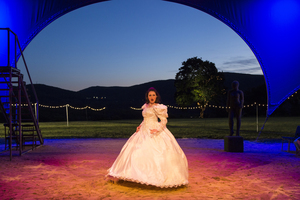 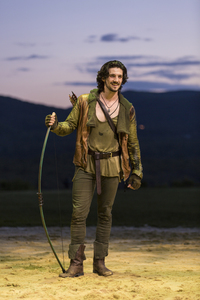 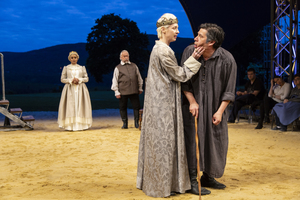 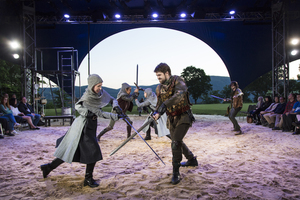 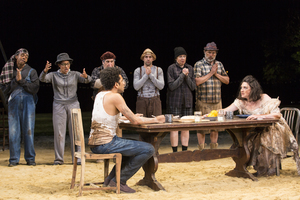 Get thee to the Hudson Valley Shakespeare Festival! Oh, how I love to see a director cast a women in a male role. That isn't to say that the HVSF non-female actors take a backseat! The finest theatrical performances in the Hudson Valley can be seen this year with a variety of productions through September 3 at the outdoor theater located on the grounds of the beautiful Boscobel House and Gardens in Garrison, New York.

This year, the season contains two Shakespeare classics, RICHARD II and THE TAMING OF THE SHREW, alongside David Farr’s adaptation of THE HEART OF ROBIN HOOD.  Each production offers the audience something different while providing a beautiful evening of entertainment for the eyes, ears, heart and soul.

In RICHARD II, you will be treated to the talents of Julia Coffey in the title role. Her formidable presence as King Richard is so engaging – the fact that a woman is playing the role is inconsequential. Mark Bedard as Henry Bolingbroke commands the stage and is a noteworthy foil opposite King Richard. Britney Simpson as Queen Isabel possesses a regal air in her brief but powerful moments. The cast also includes Wesley Mann, Kurt Rhoads, Triney Sandoval, Chris Thorn, Nance Williamson, Benjamin Bonenfant, Ralph Adriel Johnson, Biko Eisen Martin, and Liz Wisan. Artistic Director Davis McCallum and this cast of fan favorites come together for HVSF’s first-ever production of this sweeping historical drama. Performances run through August 26.

In THE TAMING OF THE SHREW, director Shana Cooper, tackles one of Shakespeare’s highly disputed comedies. “I wish we lived in a world where Taming felt dated, and reflected a sexist and gendered time that we no longer inhabit. But it just doesn’t,” states Cooper in her director’s note, “The stakes of this play feel more raw and personal than ever before. From our last election to the #MeToo movement, it has been revealed just how much the world of Padua is our own. And now the question is, what are we going to do about it?” The frustrating battle of the sexes between Liz Wisan as Kate and Biko Eisen Martin as Petruchio invite the audience to compare these worlds. The incomparable and versatile Nance Williamson plays thegender bending Tranio with her usual zest, impeccable comedic timing and hilarious facial expressions. Joining their journey are Mark Bedard, Ralph Adriel Johnson, Kurt Rhoads, Triney Sandoval, and Britney Simpson. Performances run through August 24.

In THE HEART OF ROBIN HOOD, written by David Farr and directed by Suzanne Agins, Sherwood Forest is brought to life with a unique twist on a classic tale. Yes, this production is filled with an impressive display of stage combat but it also contains a bit darker beginning for our hero. “The Heart of Robin Hood, like other adaptations, picks and chooses what to include,” explains Agins in her director’s note, “But it also turns common tropes upside down and asks us to think differently about what we think we know about Robin Hood. The Heart of Robin Hood asks WHY.” Making his HVSF debut is Benjamin Bonenfant as Robin Hood. He embodied the character to perfection and provides Robyn Kerr with a love interest for her Marion and an enemy turned friend for her Sir Martin. Wesley Mann is a delight as Marion’s manservant, Pierre. His cheeky sarcasm and comedic despair are as entertaining as his compassion and loyalty to Marion are endearing. The moment he started his opening monologue, the audience was enraptured. The cast includes Julia Coffey, Liam Craig, Sean McNall, and Chris Thorn. Local Hudson Valley child actors Samuel Bates and Adam Cabo will alternate in the role of “Jethro,” and Phoebe Bokhour and Talia Hird will alternate in the role of “Sarah.” Performances run through August 25.

We saw a common thread in this season ~ women trying to live in a man's world. A woman plays a king, a woman pretends to be a man to fight for what's right and woman battles the conventions of society forced upon her. We applaud the artistic director, Davis McCallum and his team at HVSF for bringing this fantastic season to the Hudson Valley!

Richard II, The Heart of Robin Hood, and The Taming of the Shrew" will be performed in repertory with select performances of The Sea-Maid’s Music and Rip Van Winkle. Special events and performances are planned throughout the summer.

Choose your dates and pack your picnic basket! For evening performances ticket Pick-Up & Picnicking Begins at 5:30pm with Showtime at 7:30pm.

Pricing, ticket discounts, seating chart, information about talks and special events, policies, and more can be found on their website www.hvshakespeare.org.

King Richard believes himself to be God’s chosen on earth. His word is infallible and absolute. But he is also a flawed human being, ill-suited to the demands of kingship. When Richard banishes his cousin Henry Bolingbroke, he sets off a dramatic sequence of events that seals his fate, splits his kingdom in two, and changes the course of history forever. Shakespeare’s poetic masterpiece is a story of power and privilege, of family and loyalty, of poetry and politics. But beneath all the pageantry is an aching examination of what it means to be fully human.

THE TAMING OF THE SHREW

Fire-hearted Kate isn’t first on any suitor’s list. But her father has sworn no man will wed his favored daughter, Bianca, until Kate is led away to the altar herself - kicking and screaming. When Petruchio, a wild outsider hoping to secure his fortune, rolls into town looking for a wife – and her accompanying cash dowry – everyone’s expectations are upended, and all the rules are thrown out the window. This delirious exploration of the roles we play and the complicated things we do for love, lust, and legacy raises questions about gender, anger, and power that are as timely as they are timeless.

THE HEART OF ROBIN HOOD

To escape her impending marriage to the villainous Prince John, Marion flees to the forest seeking a new life with the rogue hero Robin Hood and his merry band of do-gooding men. Instead, Marion finds a group of common crooks, stealing from the rich and giving to... their own pockets. As the Prince schemes to betray the King and endanger all of England, Marion must find the cunning and courage to take him down, save her people, and inspire the aloof Robin to find his own heart. Commissioned in 2011 by the Royal Shakespeare Company, an iconic folktale over 700 years in the making is completely reimagined in David Farr’s adaptation for audiences of all ages.