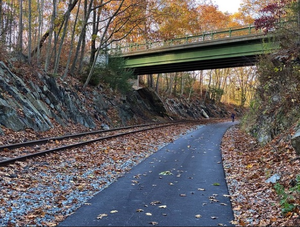 MTA Metro-North Railroad today announced the completion of the Maybrook Trailway, a 23-mile segment of the Empire State Trail in Dutchess and Putnam Counties. The Maybrook Trailway is a vital link in the Empire State Trail, launched by Governor Andrew M. Cuomo as the longest state bike and walking pathway in the nation, spanning 750-miles from New York City to Canada and from Albany to Buffalo, and completed last week. The segment was built by Metro-North with $42 million in State funds. It runs alongside an unused railroad line owned by Metro-North known as the Beacon Line, formerly owned by the Maybrook Railroad Company.

“Governor Cuomo’s vision of a state-spanning trail a reality, and for giving new life to this area along Metro-North’s Beacon Line,” said Catherine Rinaldi, President of Metro-North Railroad. “This project ensures that outdoor enthusiasts will be able to enjoy the trailway for decades to come. Metro-North is proud to have played a role in the creation of this trailway. Healthy, socially distanced outdoor recreation never seemed more important than it does now.”

Erik Kulleseid, New York State Commissioner of Parks, Recreation and Historic Preservation, said, “This new trailway is another piece of Governor’s Cuomo’s plan for the Empire State Trail to connect the state in way that will provide New Yorkers with boundless opportunities for healthy and safe outdoor recreation, which is more important than ever during this pandemic. New York State Parks thanks Metro-North for supporting this vision by constructing the Maybrook Trailway.”

The trail is an 8- to 10-foot-wide, asphalt-paved path. Essentially free of hills, the non-motorized trailway is designated for shared use by bicyclists, runners and walkers of all ages and abilities, and in winter, cross-country skiers and snowshoers. Along the route, the trailway winds through rural landscapes and wooded areas featuring seasonal waterfalls and crosses the Appalachian Trail.

The new trailway’s southern trailhead is in the Village of Brewster in Putnam County. It runs northwest to the hamlet of Hopewell Junction in Dutchess County, passing through the towns of Southeast, Paterson, Pawling, Beekman and its northern trailhead in East Fishkill. In Brewster, the trailway connects to the existing Maybrook Trailway, a 5.5-mile scenic route along the East Branch Reservoir in Southeast, and Putnam Trailway that connects with Westchester County’s North County Trailway en route to New York City. In Hopewell Junction, the segment connects with the William R. Steinhaus Dutchess Rail Trail that leads northwest to Walkway Over the Hudson State Historic Park. (View a map of the Empire State Trail.)

Metro-North stations at Poughkeepsie and Brewster provide access to the trailway, as does the northern terminal of the 1 line at 242 St-Van Cortland Park. New York City’s largest portion of the Empire State Trail – The Hudson River Greenway – can also be reached by numerous subway stations and bus routes in Manhattan from the Battery to Inwood. Detailed information including an interactive map detailing the route, designated parking areas and nearby attractions is available on the Empire State Trail website.

Putnam County Executive MaryEllen Odell said: “We are especially grateful to Metro-North Railroad, which built the 23-mile Maybrook Trailway from Brewster to Hopewell Junction despite facing difficult financial times. Metro-North has always been a good partner to the county and, once again, the railroad has shown its commitment to Putnam residents. The new Maybrook Line section of the Empire State Trail is an amazing asset and a great way for cyclists and walkers to see the natural beauty that Putnam County has to offer.

Dutchess County Executive Marc Molinaro said: “Dutchess County’s rail trails are recreational gems for residents and visitors alike and over the past year, more people than ever before have taken advantage of the opportunity to walk, run, bike and more while enjoying the natural beauty of Dutchess County. In 2020, we expanded our trail opportunities with the completion of the Harlem Valley Rail Trail to Columbia County and now as we begin we begin 2021, we are thrilled to have the addition of the Maybrook Trailway, as part of the newly completed Empire State Trail. Dutchess County is proud to partner with Metro-North Railroad to maintain much of this new 23-mile section, which connects to our Dutchess Rail Trail at the Hopewell Depot and extends to Brewster. This much anticipated opening is the perfect way to keep our resolutions for good health, fitness, and connection with nature as we begin the new year.”

State Senator Pete Harckham said: “I thank Metro-North employees for their work to complete this trailway during such challenging and difficult times. I am also grateful for their selfless sacrifice in keeping the trains running so first responders and essential workers can travel to their jobs. The Maybrook Trailway offers outdoor recreation opportunities for residents—an appropriate alternative at a time when people are staying indoors because of the Covid-19 pandemic. In addition, the trailway will help support new sources of economic development and tourism for the region.”

Assembly Member Kevin M. Byrne said: "During my first term in 2017, New York State began the project of connecting 750 miles of trailways to create the Empire State Trail. For years members of our community, including me and my family, have personally enjoyed the use of our local parks and trails. Now, after much effort by many across the state, these trails are finally connected into a larger network that both highlights the natural beauty of our state and provides more access to our walkways, trails and hikes that promote healthy living. I thank all those involved who worked so hard to make this a reality."

Putnam County Legislator Joseph Castellano said: “The trailhead at Tonetta Lake in the Town of Southeast is surely the most beautiful section of the trail, which runs alongside lakes, forests and rolling hills. The Maybrook Trailway not only expands the opportunities for outdoor recreation in town, it will benefit businesses in the Village of Brewster.”

Dylan Carey, Project Director for Parks & Trails New York, said: “For decades, Parks & Trails New York has envisioned a continuous Hudson Valley Greenway that connects people with natural areas, historic sites, and local communities through safe, off-road trails. With the completion of the Maybrook Trailway and the Empire State Trail, we are excited to see that vision come to fruition. We thank Governor Cuomo for his visionary leadership in completing the Empire State Trail, and look forward to all the great recreational opportunities that the trail system offers.”

The Beacon Line was the first all-rail freight connection across the Hudson River north of New York City. It originally opened as a rail line in 1892 and served as a vital transportation link between New York and southern New England, carrying trains between Derby Junction and Maybrook, via the bridge over the Hudson River at Poughkeepsie that is now the Walkway Over the Hudson. Powerful steam locomotives once pulled and pushed heavy freight trains over the mountain between Brewster and Hopewell. Passenger service ended in the 1930s and freight traffic tapered off later in the 20th century, especially after a 1974 fire that closed the Hudson River bridge to train traffic.