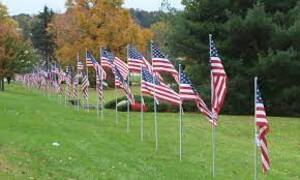 As the county plans the upcoming Row of Honor to line the shore of Lake Gleneida in Carmel, Putnam County Executive MaryEllen Odell extends her appreciation to the New York City Department of Environmental Protection (DEP), whose stewardship of the lake has kept it pristine.

The DEP owns Lake Gleneida and the surrounding shoreline, which are part of the city’s vast reservoir system.

“I want to thank the DEP for working together with the county to keep Lake Gleneida beautiful,” County Executive Odell said. “The lake is the centerpiece of the Town of Carmel, and its shoreline is home to our twice-yearly Row of Honor salute to veterans and other celebrations that bring our community together. For those reasons, and the fact that it is part of the New York City watershed, we must all protect Lake Gleneida and treat it with care.”

Legislator Carl Albano, whose district includes the hamlet of Carmel, agreed that the lake is a jewel that must be preserved.

“I look forward to the spring and seeing the trees trimmed on the shores of Lake Gleneida,” Legislator Albano said. “Every season brings something new at the lake.”

This year, the Row of Honor that lines the lakefront every Memorial Day and Veterans Day will feature at least 550 flags as memorials to veterans, the most since the tradition was started nearly a decade ago.  The flags, sold for $100 to those who want to recognize a veteran, are flown every year.

“Each year the number goes up, as more and more people want to recognize those who have served their country,” said Karl Rohde, director of the Putnam County Veterans Services Agency. “I know there will be more than 523 flags, because when I served in Vietnam, I served in the 523rd Signal Battalion and so I bought flag number 523 to honor those I served with.”

Rohde said the county and the Putnam County Joint Veterans Council are also busy planning for the return of the Vietnam Travelling Memorial Wall, which will come to Putnam for a fifth time in the fall of 2022.