Students Rise to the Challenge for Blood Cancer Fundraiser 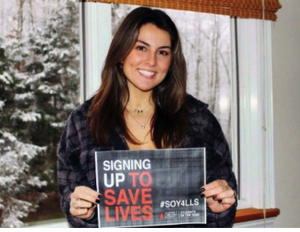 In a time when so much has changed, one thing that has not changed is Carmel High School (CHS) students’ commitment to supporting cancer awareness and raising much-needed funds for research.

For the past several years, CHS students have supported the Leukemia & Lymphoma Society’s work through annual fundraisers, including a “Pennies for Patients” drive. In the fall, a colleague of social studies teacher and student organization adviser Kerry Hackert recommended Carmel High School participate in another Leukemia & Lymphoma Society fundraising challenge, the Student of the Year campaignOpens in a new browser tab.

Hackert thought the challenge would give students leaders, accustomed to organizing many events in a typical year, a cause to rally around. When she suggested participating to student government leaders, they were immediately onboard. Seniors Olivia Scaperotti, Matt Wetzel and Taylor Crow stepped up to lead Team Carmel Rams in the challenge.

“I think it was really important for all three of us to take the time that freed up in our schedules through student government, and in general due to COVID, and give back to the community and help others,” said Scaperotti.

The campaign on behalf of the Leukemia & Lymphoma Society usually kicks off in September with the start of the new school year, but the Carmel team joined the challenge in early December. That meant they only had seven weeks of fundraising time in the competition against other schools in Putnam, Westchester and Fairfield counties – all of whom had more lead-time.

As team leaders, the three seniors formed a multi-generational team of 43 members including teachers, community members and their school peers.

“We had a lot of work on our plates, and we were the ‘face’ of the fundraiser,” said Crow. “We really had to do everything we could to make sure that we were raising the most money that we could.”

Given the COVID-19 restrictions, the team leaders and their members had to rely on personal connections when it came to making donation appeals. Scaperotti noted that she and her fellow leaders gained valuable experience in email marketing and social media networking, utilizing different channels to reach out based on the target audience.

“We weren’t able to do many in-person events, so it really was about the personal asks and reaching out to contacts to spread the word to try to raise money,” said Wetzel. “We kept pushing the thought that any amount helped, and no amount was too small."

Despite a later start than other schools in the area, Team Carmel Rams raised $17,797.36 as part of the challenge, surpassing their initial $15,000 goal. The total raised for all the teams in the Putnam, Westchester and Fairfield Counties region was an impressive $522,288.

“It was crazy to see everything come together, knowing how hard we worked and how much time we put into this,” said Crow. “Once we saw our goal exceeded, it was a rewarding feeling. To be able to help these people who are dealing with blood cancers felt really great.”

“They far-exceeded the expectations that we had, and did a phenomenal job,” said Hackert, who served as the adviser to the team. “I still can’t believe how much money was raised, especially during a pandemic and in only seven weeks. It was pretty amazing.”

The seniors have already inspired their younger peers and there are interested individuals planning to take over leading the challenge for Team Carmel Rams next year. They can’t wait to watch the team succeed next year, and are already willing to offer their veteran advice:

“Don’t feel shame in asking for donations because every dollar counts, and you will never know if you don’t ask,” said Scaperotti. “Always keep the cause in mind.”