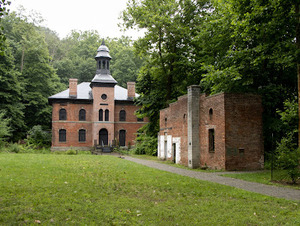 Preserve Is Where Some Of The Nation’s First Steam Engines, Trains, And Pipes For NYC Water System Were Manufactured In The 1800s

Following years of advocacy on the historic value for the West Point Foundry Preserve in Putnam County, New York, U.S. Senate Majority Leader Charles E. Schumer, U.S. Senator Kirsten Gillibrand, and Congressman Sean Patrick Maloney today announced the National Parks Service (NPS) has heeded their call and awarded the site designation as a National Historic Landmark. This designation will ensure the integral contributions the 93-acre site has made to advancing American ingenuity in mechanical engineering are preserved and shared with future generations to come.

“Finally, after years of work, the West Point Foundry Preserve, the site of some of America’s most prevalent manufacturing at the start of the Industrial Revolution, is officially recognized for its immense historical significance and tremendous natural beauty,” said Senator Schumer. “I am proud to have fought for this designation as a National Historic Landmark in Putnam County and am thankful that new access to critical federal funding will help preserve this breathtaking destination for future generations.”

“The West Point Foundry helped the U.S. become an industrial superpower in the 19th century, manufacturing everything from cannons for the Union Army to pipes for New York City’s water system,” said Senator Gillibrand. ”I am proud to have fought to preserve this historic New York treasure so that people from all over the country can continue to visit, learn about the site’s critical role in the Industrial Revolution, and enjoy the spectacular scenery of the Hudson Valley.”

“I am proud to have fought for the West Point Foundry to be awarded as a National Historic Landmark, a designation long overdue given the Foundry’s groundbreaking work in transportation and manufacturing during America’s Industrial Revolution,” said Rep. Sean Patrick Maloney. “This incredible historic site is finally receiving the recognition and funding it deserves, and I can’t wait for more Americans to learn about this incredible piece of New York’s proud history.”

"Scenic Hudson is honored that the West Point Foundry Archeological Site has become a National Historic Landmark,” said Scenic Hudson President Ned Sullivan. “We protected and created West Point Foundry Preserve to ensure that the remains of this industrial powerhouse would always be available for visitors to learn about the important role it played in growing and reuniting our nation, and to provide an opportunity for future study. Scenic Hudson thanks Senators Schumer and Gillibrand and Rep. Maloney for their active, long-time support of this designation.”

The representatives explained that the West Point Foundry Archaeological Site is located on a 93-acre nature preserve in Putnam County, New York—63 miles north of New York City. The site has a rich history as a former hub of mechanical innovation during the Industrial Revolution. Recognizing the need for American companies to control the production process of essential technology, the 19th century site in Cold Spring operated from 1818 to 1911 and was contracted after the War of 1812 to provide the U.S. government with cannons and ammunition, and later provided these vital supplies to the Union Army during the Civil War.  The delegation said that its groundbreaking development of the Parrott gun—lauded for its range and accuracy—captured the interest of President Abraham Lincoln and prompted a presidential visit in 1862.

Additionally, the representatives said that the foundry pioneered the creation of new methods of transportation, and manufactured some of the nation’s first locomotives and steamships, which helped to connect the nation’s countryside and waterways and transformed the United States’ economy. Amongst its many accomplishments, the foundry also produced machinery for the cotton and sugar industries and provided cast-iron pipes that supplied New York City's first water system.

The delegation applauded Scenic Hudson, a Hudson Valley-based nonprofit and the steward of the foundry, along with several research organizations that have fostered significant archeological discoveries over the last 30 years that have helped to broaden the public's understanding of the technological advancements of the day, and the influence industrialization had on social and cultural transformations. The representatives further explained that the West Point Foundry continues to be a center of learning and exploration and was named a Historic Mechanical Engineering Landmark by the American Society of Mechanical Engineers (ASME). Today's designation of the foundry as a National Historic Landmark will support enhanced scholarly research and cement the Foundry as a go-to destination in the Hudson Valley.