What's Up: Skywatching Tips from NASA 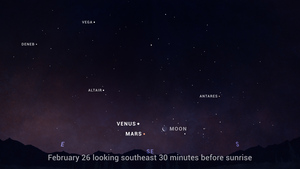 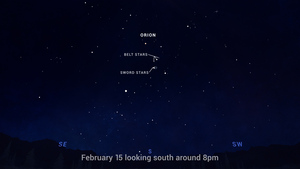 What's Up for February? Jupiter makes its exit, Venus at peak brightness, and the star-forming cloud next door.

With the departure of Saturn and Venus over the past two months, Jupiter is the only bright planet left in our twilight skies in February, and it's on its way out! The giant planet stands alone, low in the western sky after sunset in February. By mid-month, it's setting only about an hour after the Sun. Once Jupiter departs at the end of February, the post-sunset sky will be essentially devoid of naked-eye planets until August, when Saturn will start rising in the east around sunset. (There's a short period, though, in April and May when you might be able to spot Mercury as it pops briefly above the horizon.)

You'd have to go back four years, to March of 2018, to find twilight skies with no bright planets. So catch Jupiter before it's gone. And look for to become a morning planet in April.

Speaking of morning skies, the planet Venus will be at its brightest for the year in February, around mid-month. It rises with Mars around 4 a.m. and is visible low in the southeast until sunrise. Venus is the brightest of all the planets in our solar system because of the highly reflective clouds that completely cover its globe.

But its brightness in our skies varies, depending on how far it is from Earth and on its phase. Turns out Venus is brightest not when it's closest to Earth, but when it's almost at its closest and still shows us a large, bright crescent phase.

So enjoy the rescent Venus that is the planet at its brightest. And look for Venus to form a trio with the Moon and Mars on the morning of February 26th.

February is a perfect time to enjoy one of the most popular and well-studied sights in the night sky: the Great Nebula in Orion. The Orion Nebula is an enormous cloud of gas and dust where thousands of stars are being born. In fact, it's the nearest large star-forming region to our solar system, at around 1,500 light-years away. The bright, central region of the Orion nebula is a giant cavity in the cloud being carved out by the intense ultraviolet light from a handful of extremely massive young stars.

Find Orion high overhead on February evenings, where the Orion Nebula is an easy target for binoculars and telescopes. Credit: NASA/JPL-Caltech

Finding the Orion Nebula is easy on February nights, as the constellation Orion will be high in the south around 8 or 9 p.m. Look for the three stars of the hunter's belt, and then find the stars that hang below it forming Orion's sword. In the center of this line of stars is one that looks kind of fuzzy. That's the nebula. It's visible to the unaided eye under relatively dark skies, and is easily seen with binoculars as a faint haze. And through a telescope, it's a sight you'll never forget.