Byrne Stands with Victims of Bail Reform and Demands Change 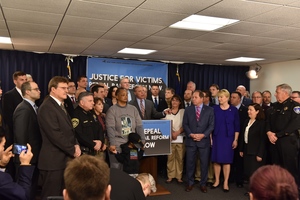 Assemblyman Kevin Byrne (R,C,Ref-Mahopac) joined Assembly Minority Leader Will Barclay (R,C,I,Ref-Pulaski), Assembly colleagues, law enforcement officials and the families affected by the newly-implemented bail reform law on Wednesday, January 15 at the state Capitol. Speakers at the conference included Sheila Harris, who lost her cousin, Maria “Rosie” Osai, a mother of three, who was struck down and killed by an unlicensed hit-and-run driver on Christmas Eve. Jennifer Payne, whose daughter, Sarah Tombs, was shot and killed by her boyfriend last April with her 4-year-old daughter in the next room, also spoke about how her daughter’s accused killer walked free due to bail reform.

“The number of victims harmed by criminals who have benefited from these dangerous so-called reforms continues to grow every day,” said Byrne. “This is yet another example of how rushed-through legislation passed in the wee hours of the morning has real-life consequences on everyday New Yorkers. Listening to the surviving family members of Maria “Rosie” Osai and Sarah Tombs pains me deeply, and I know there are many more stories similar to theirs. No one should have to live through the hurt of witnessing the criminal who ripped apart their family walk free without bail while they, the victims, are left to pick up the pieces of their life. The fact that the governor and Assembly leadership in the Majority have not allowed us to address this yet is unconscionable. With every day that passes, more victims cry out for help and seek a repeal of these reforms. Albany is in session, let’s get it done.”