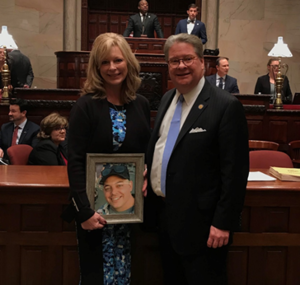 New York State Senator Pete Harckham and his Senate colleagues advanced on Tuesday February 4th, a number of bills that will combat substance misuse and protect New York communities from the scourge of opioid addiction.

Additionally, Harckham and the State Senate Leadership released a report generated by the Joint Senate Task Force on Opioids, Addiction & Overdose Prevention. The Task Force, of which Harckham was one of three co-chairs, was charged with holding hearings, visiting treatment sites, and speaking with experts and families impacted by Opioid Use Disorder; together, the Task Force used those experiences to guide the Senate Majority on how to best address this crisis. The legislation passed by the State Senate takes into consideration the complexity of the opioid epidemic, and, it is hoped, will provide support to those fighting addiction and health care providers while also expanding government services for people with Substance Abuse Disorder.

“The passage of these important bills addressing the opioid crisis demonstrates that my Senate colleagues and I are taking a multi-faceted approach to saving lives,” said Harckham, chair of the Senate’s Committee on Alcoholism and Substance Abuse. “Along with Stephen’s Law, which allows certified treatment providers to make emergency contacts for patients, the bills also ensure that certain patients be prescribed an opioid antagonist like naloxone to prevent an overdose, and also be given educational materials and instructions regarding overdose prevention and treatment. We also made it easier for Good Samaritans to administer opioid antagonists in public places without fear of legal liability. These are important steps toward a larger and critical awareness that lives can be saved, and must be saved, with smart, thoughtful policies regarding treating Substance Use Disorder and preventing overdose fatalities.”

In addition to generating a report, the work undertaken by the Joint Senate Task Force on Opioids, Addiction & Overdose Prevention helped identify ways state government would be better able to combat the opioid crisis and help New Yorkers who are dealing with Substance Use Disorder. The legislation passed by the Senate today includes several bills sponsored by Harckham:

“The opioid crisis has destroyed lives and devastated communities throughout our state,” said Senate Majority Leader Andrea Stewart-Cousins. “The Joint Senate Task Force on Opioids, Addiction & Overdose Prevention has worked tirelessly holding hearings, coordinating with experts, and helping develop legislation to address this crisis. I thank Senators Carlucci, Harckham, and Rivera, for co-chairing this task force, and I commend all of the task force members and bill sponsors for their hard work generating this report and advancing this legislation. The Senate Majority will continue our fight to protect New York communities and New Yorkers’ health.”

Senator Harckham spoke at a news conference today on the passage of the opioid legislation. (Here is a link to a video of his speech, or visit: https://www.youtube.com/watch