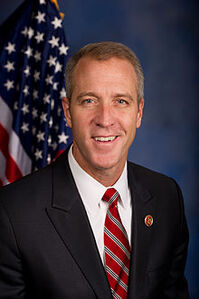 If the rule were to go into effect, federally-funded service providers could discriminate on the basis of sexual orientation and gender identity. Taxpayer-funded adoption and foster agencies would be able to refuse to acknowledge same-sex marriages and turn away LGBTQ parents, and transgender teens could be turned away from federally-funded shelters.

“Under this bigoted Trump Administration rule, federally-funded foster care and adoption agencies could refuse to place a child with a married same-sex couple, making it harder for families like mine to exist,” said Rep. Maloney. “There are over 100,000 kids in the foster system ready to be adopted – they are the collateral damage in the Trump Administration’s war against the LGBTQ community. As a gay dad with three kids, I know first-hand that good parents are good parents – it doesn’t matter what they look like or who they love. When you sanction discrimination against LGBTQ couples, you deprive kids like mine of good moms, dads, and families who will love them unconditionally.”

“The Trump Administration's eleventh-hour attack on the LGBTQ community was cruel and dangerous,” said Rep. Craig. “As the first openly LGBTQ member of Congress from Minnesota, I thank the Biden Administration for taking immediate action to pause this harmful rule. We must ensure equal protections under the law for all Americans, and I look forward to working with the Administration to do just that.”

“Even though Donald Trump is no longer in office, his Administration’s bigoted and discriminatory policies towards the LGBTQ community continue to threaten the rights of folks across this country. That’s why I’m joining my colleagues Representatives Maloney and Craig, in calling on the Acting Head of the Department of Health and Human Services to immediately reverse a dangerous rule that would end nondiscrimination protections within federal social services, such as taxpayer-funded adoption agencies and youth shelters. The federal government has a responsibility to ensure no one in this country suffers from discriminatory practices,” said Rep. Velázquez.

In February, HHS agreed to a court order that will temporarily halt the Trump administration’s anti-LGBTQ rule change for 180 days. Rep. Maloney looks forward to working with the Biden administration and HHS leadership to ensure the rule is fully reversed.

In addition to Reps. Sean Patrick Maloney, Angie Craig, and Nydia M. Velázquez, this letter was signed by 63 members of Congress.

Read the full letter here and below:

As you know, a week before the end of his presidency, the Trump administration finalized an unlawful and dangerous rule that would end nondiscrimination protections within social service programs. If this rule were to go into effect, it would eliminate critical protections preventing providers from discriminating on the basis of sexual orientation and gender identity when providing Department of Health and Human Services (HHS) grant-funded services. The rule also included language essentially ignoring the Supreme Court’s marriage equality decisions.

The Trump administration’s sanctioning of taxpayer-funded intolerance against people who receive services from HHS grant programs, including youth and families in the child welfare system, youth experiencing homelessness, and elder Americans, is reprehensible. Upon the rule's initial proposal, over 100 members of Congress called for its withdrawal to halt a harmful disruption to children, adults, and families across the country.  Under the shameful practices perpetuated by the Trump administration, a federally-funded foster care agency could refuse to place children with a married same-sex couple or a transgender teen could be turned away at an HHS-funded shelter. During these unprecedented times we should be finding ways to support our citizens, not discriminating against them under the guise of religious liberty.

In response to a lawsuit filed by foster youth groups as well as LGBTQ advocacy organizations, HHS agreed to a court order that immediately stayed the effective date of this anti-LGBTQ rule. The effective date was extended by 180 days to August 2021 giving HHS time to reverse the rule.

We applaud the Biden-Harris administration for hitting pause on this harmful Trump-era rule, and it is our sincere hope that your agency will move forward expeditiously to ensure that all persons receive equal treatment under the law. Congress looks forward to working with you to make that a reality.