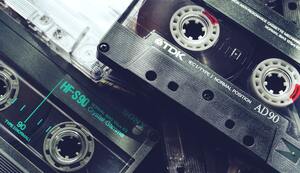 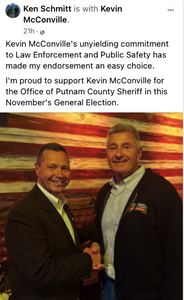 Update: 10/01/2021 at 4:34 pm. HamletHub has received new information and that information is reflected in bold in the article.

An audio recording was released late last night by a Putnam County Watchdog Group apparently reveals Putnam County Sheriff Robert Langley , Jr., and current Carmel Town Supervisor Ken Schmitt, discussing the possibility of Schmitt joining the Langley “Administration” after he leaves office in Carmel at the end of the year.  The audio was supposedly recorded in late August during a telephone call from Langley to Schmitt. Langley can be heard at the end of the recording telling Schmitt that he was on "one of my phone numbers", in response to Supervisor Schmitt asking him if he was on his personal cell phone.

Schmitt had, earlier this year, supported Kevin McConville, the Sheriff’s opponent in the November 2021 election and just yesterday afternoon Schmitt had posted to his personal Facebook page, "Kevin McConville's unyielding commitment to Law Enforcement and Public Safety has made my endorsement an easy choice. I'm proud to support Kevin McConville for the Office of Putnam County Sheriff in this November's General Election." along with a picture of himself shaking hands with McConville.

The Facebook group, Putnam County Watchdog Report, released the audio tape to their Facebook page and said it was obtained during a series of recent “sweeping” Freedom of Information Law (FOIL) requests.

Langley’s opponent this November,  Kevin McConville, released the following statement earlier today addressing the audiotape. McConville spoke to HamletHub this afternoon and called the situation “The Watergate of Putnam County” as it “undermines the trust and integrity that local residents expect in their elected leaders”.

McConville has called for an investigation of the incident by the Putnam County District Attorney's Office for any Code of Ethics violations or violations of Law in the making of the recording or in the conversation itself.

Read the full Version of McConville’s statement below:

"Late last night, an audio recording of a conversation between Putnam County Sheriff Bob Langley and Carmel Town Supervisor Ken Schmitt was released, raising serious concerns about the unethical conduct of Sheriff Langley and endangering the credibility, trust, and transparency of the Sheriffs Department, The eighteen plus minute recording, which was political in nature, was seemingly recorded at Sheriff Langley's office and can only be described as Putnam County's version of Watergate. Simply put, it is a violation of the public trust and so unethical, it would make President Nixon and former FBI Director 3. Edgar Hoover blush.

The public deserves to know why the Chief Law Enforcement Officer of the county is secretly recording and releasing taped conversations with their Elected Officials.

• How often does he record conversations?

• Where are they stored?

• Is it standard operating procedure within the Sheriffs Department to record conversations without probable cause or evidence that a crime has been committed?

• Why is he having political conversations with other Elected Officials from the Sheriffs Department?

In addition, I'm calling on the District Attorney to immediately open an investigation into the actions of Sheriff Langley, so that we can restore the public trust and ensure this never happens again."

Neither Supervisor Schmitt nor Sheriff Langley have returned calls for comment at this time.