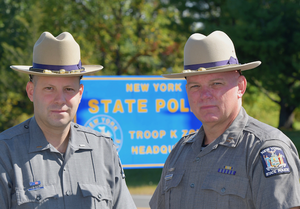 Captain David Kolb started his career as a Trooper in 1992 working in Troop K - Zone 1, and for two years in the Governor’s Protective Service Unit before returning to Troop K in 2000.  He was promoted to the rank of Sergeant in 2001 serving first in Troop F, and later in Troop K.  As a Sergeant, Capt. Kolb, served as Station Commander of both the Rhinebeck, and Livingston barracks.  He then served as the Emergency Management noncommissioned officer of Troop G beginning in 2005 prior to being promoted to the rank of Lieutenant in 2014.  Lt. Kolb was initially assigned to Troop F, and the Internal Affairs Bureau, before returning to Troop K in 2016, eventually being assigned as the Assistant Zone 1 Commander.  Capt. Kolb was promoted to his present rank in 2018, where he first served as the Troop Executive Officer at Troop K Headquarters, before being assigned to his current assignment as the Zone Commander for Zone 1.  Capt. Kolb has earned two Letters of Commendation from the Superintendent, and one Superintendent’s Award throughout his career.

Lieutenant Scott Hurley joined the New York State Police as a Trooper in 2000, and was assigned to numerous stations in both Putnam and Dutchess Counties.  In 2006 he was promoted to the permanent rank of Sergeant, and appointed Investigator on the same day.   He was initially assigned as an Investigator to the SP Wappinger barracks, until 2012 when he joined the New York State Police Computer Crimes Unit, responsible for digital investigations in all 4 counties of Troop K.  Upon his promotion to Lieutenant in 2015, he was assigned to the Bureau of Criminal Investigation in Troop K, until transferring to Zone 1 as the Assistant Zone Commander in December of 2018.

Both officers bring a wealth of knowledge, and experience with them to Zone 1 Headquarters SP Livingston.  They look forward to serving the people of Columbia and northern Dutchess Counties.